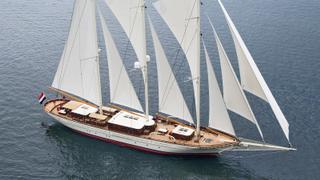 Built in laminated mahogany on steel frames by Turkish yard Dream Ship Victory to a design by Dykstra Naval Architects, she is RINA classed and was delivered in 2013 as a three-masted schooner, going on to collect a coveted Neptune trophy at the 2014 World Superyacht Awards.

Ken Freivokh designed an ultra-luxurious interior accommodating up to 12 guests in five cabins, comprising a main-deck master suite with a private lounge, two mirror-image VIP suites and two twins with Pullman berths. All cabins have entertainment centres and en-suite bathroom facilities while a further six cabins can sleep up to ten crewmembers aboard this yacht for sale.

Double doors lead into the deckhouse saloon area. To port is a well appointed bar, forward of which is the dining area with seating for up to ten guests. To starboard is a games table, forward of which is the comfortable saloon area with two sofas, two large arm chairs and a coffee table along with an entertainment centre including a large screen Sharp Aquos television and a Pioneer stereo surround sound system.

On the technical side, she carries a full wardrobe of Doyle sails and is fitted with Rondal winches. Under power, twin MTU 8V2000 M72 diesel engines allow a cruising speed of 14 knots and a range of 2,950 nautical miles at 12 knots.

On display at the Cannes Yachting Festival, Mikhail S. Vorontsov is now asking €21,750,000.