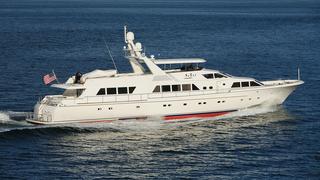 The 42.4 metre motor yacht Sotaj, listed for sale by Kevin Merrigan and Wes Sanford at Northrop & Johnson, is sold with Dana Cambon at Luke Brown Yachts representing the buyer.

Sotaj was built by German yard Abeking & Rasmussen in aluminium with exterior styling by the late Tom Fexas and she was delivered in 1985. She had a major $10 million two year refit at Delta Marine from 2007-2009, including a four metre hull/aft deck extension, fresh paint, new Caterpillar engines and the installation of zero-speed stabilisers, among other upgrades. A great deal of effort and engineering went into the aesthetic and practical considerations of the hull extension. For example, all of the running gear was moved aft to ensure there would be no compromise to her sea-keeping abilities.

She can now easily match the capability and feel of a modern superyacht but maintains a classic, traditional feel that is so difficult to replicate. An interior by Orsini Design Associates provides accommodation for eight guests in four cabins consisting of a master suite, VIP suite and two twin cabins, all with en suite facilities. In addition, there are quarters for up to nine crew, including a private captain’s cabin.

Twin 1,635hp Caterpillar engines give her a range of 3,500 nautical miles at 12 knots. The zero speed stabilizers and shallow 7 foot draft are perfect to get into shallower cruising areas, such as the Bahamas, and anchor comfortably anywhere the owner chooses.