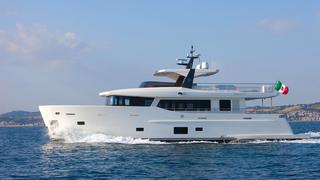 The 25.15 metre motor yacht Yolo has been sold with Michael Newton-Woof at Ventura Yachts representing both buyer and seller.

Built in aluminium by Italian yard Cantiere delle Marche, she was delivered in 2014 as the first in the yard’s Nauta Air series. The unconventional layout, developed according to the owner's request for an informal and functional distribution of spaces, features a galley near to the cockpit, set aft and to port, followed by a cozy dining and lounging area. The full beam owner suite, accessed through a dedicated staircase, is on the lower deck amidship while two guest cabins – a VIP suite and a twin cabin – share the forward section of the hull with a large gym with adjoining shower and hammam.

A 60 square metre flybridge equipped with bar, barbecue, jacuzzi and a second pilot station is probably the biggest found on board a yacht of this size and is ideal for al fresco entertaining and dining. Two Caterpillar C18 Acert give her a top speed of 17 knots and a range of 3,200 nautical miles at nine knots.

Yolo was asking €5.2 million and is now named Rosey.