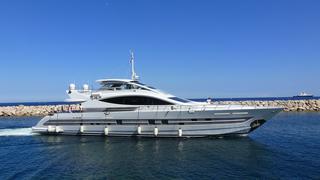 A 31.1 metre Cerri 102 motor yacht has been sold with Luca Gianardi at Master Brokerage in Italy representing both buyer and seller.

Built in GRP by the Italian yard Cantieri Navali Cerri to an in house design to RINA class as a fast sports yacht, she was delivered in 2014 as a Cerri 102 model. A large main saloon has two settees, occasional chairs and a 75 inch motorised LCD television screen plus a Bose surround sound system. Forward of this is a formal dining area for six, crystal and crockery storage cabinets and a wine cooler.

Accommodation is for up to nine guests in four cabins. The master suite has a double bed and a 40 inch LCD television while the VIP is also a double and also has a 40 inch LCD television. To starboard is a further double with a 32 inch television, while aft there is a twin cabin with a 32 inch television plus a Pullman berth. All staterooms have en suite bathroom facilities. She sports a deep-V hull design, and twin 2,600hp MTU engines linked to surface drives power her to speeds of up to 38 knots.

Lying in San Remo, Italy, the Cerri 102 was asking €5.5 million and her buyer is moving her to Canada where she will be privately used.