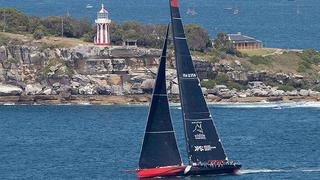 While Christmas Day is a day of celebration for most, for the owners of the 117 yachts taking part in this year’s Rolex Sydney Hobart race in Australia it is a day of nervous anticipation. None more so, this year, than for American entrepreneur and superyacht owner Jim Clark, whose brand new supermaxi yacht Comanche will be looking to steal line honours from Bob Oatley’s Wild Oats XI – one of the most successful yachts ever to take part in the Rolex Sydney Hobart race.

Netscape co-founder Clark, whose yachts have included the J Class Hanuman and the Royal Huisman giant superyacht Athena – launched in 2004 and at 79.25 metres, the fourth largest private sailing yacht in the world – surprised many when he announced two years ago that he was going to sell his boats and get out of yachting. However, it seems a chat with serial yacht owner (and 2009 Sydney Hobart line honours winner) Neville Crichton goaded him into building Comanche specifically to take line honours and set records in some of the world’s most famous offshore races.

The annual Rolex Sydney Hobart Race, which was first run in 1945, is considered one of the all-time classics in offshore racing, and is up there with the UK’s Fastnet race not only in terms of stature, but also in its fearsome reputation. Both races have been hit with severe storms in the past, leading to the loss of several yachts and, tragically, several lives.

The unique weather systems that can roll through the Bass Straight between Australia and Tasmania can give gale force winds and horrendous seas, but they can also provide perfect conditions for a Boxing Day blast – the current record for the 628-mile course was set in 2012 by Oatley’s Wild Oats XI, which completed the race in one day, 18 hours and 23 minutes.

Wild Oats XI remains the most successful yacht ever to take part in the Rolex Sydney Hobart race, having reaped a total of 7 line honours wins, of which two were converted into overall wins, in 2005 and 2012.

Clark – who is married to Australian model Kristy Hinze-Clark – has spent an estimated $15 million on the 30.48 metre Comanche. She was designed by French naval architects VPLP and Verdier Yacht Design, and built at Hodgdon Yachts in the US. The yacht was officially launched on 13 October 2014 so the Sydney Hobart race will be a real baptism of fire for her crew.

‘We launched the boat in Maine maybe a week and a half before we had to put it on a container ship to send it to Australia,’ Jim Clark told The Australian newspaper, ‘so it has hardly been in the water.’

Clark has described Comanche as being 'a Volvo 70 on steroids'. While not specifically designed to win the Rolex Sydney Hobart – Clark has said he would have built another Wild Oats XI if that was the aim – the radical design has been optimised for record breaking particularly in beam wind conditions. The yacht has already shown a good turn of speed upwind too, but Clark admits that a light airs downwind race will likely scupper the yacht's chances of victory. There's no question that Clark has the crew to pull in a win, though, led by US race skipper Ken Read. ' the conditions have to be right,' Read has said on Comanche's chances. 'You can have the greatest thing since sliced bread but you won't go record breaking if the weather's not right.'

Comanche might have her work cut out as she will be racing several other seasoned 30.48 metre supermaxis including Wild Oats XI; _Syd Fischer’s _Ragamuffin;Rio, _owned by American tech millionaire Manouch Moshayedi; and Sydney accountant Anthony Bell’s _Perpetual Loyal. The race start is scheduled for 1300 local time on Boxing Day, 26 December, in Sydney Harbour.

For Clark, however, it seems that the goading by Crichton – owner of the maxi Alfa Romeo, and Feadship superyacht Como – is perhaps not the whole story behind building Comanche. ‘My wife made me do it,’ Clark confesses…