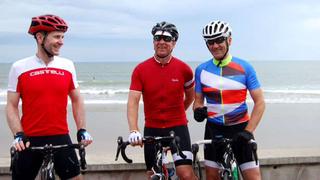 The riding team includes: Nigel Musto, CEO of Musto Clothing; Andy Hindley, COO of Ben Ainslie Racing, which has recently established its bid as Challengers for the next America's Cup; and Tony Harris, CEO of Boat International Media.

Conceived in 1952, the Raid Pyrenees event challenges cyclists to complete a gruelling 760-kilometre course from one side of France to the other, crossing the Pyrenees Mountains, with 12,000 metres of ascents, and finishing it all in less than 100 hours. The riders began in Heydene, on the Atlantic side of the French-Spanish border, and they will finish in Cerbere, on the French-Spanish border of the Mediterranean coast.

Musto, Hindley and Harris are riding to raise funds for the Andrew Simpson Sailing Foundation, which was founded by Sir Ben Ainslie, Iain Percy and Andrew’s wife, Leah. Olympic silver-medalist Andrew 'Bart' Simpson sadly passed away last year while training in San Francisco for the America's Cup. The Andrew Simpson Sailing Foundation aims not only to encourage young people into the sport of sailing, but to help young people between the ages of five and 24 years old improve personal skills and gain access to careers in the maritime sector.

'Tony, Andy and I all knew Bart,' says Nigel Musto. an exceptionally talented sailor, an Olympic medalist, but also one of the nicest guys you could wish to meet. The foundation gives kids who wouldn't otherwise get the opportunity to enjoy our sport, and it is a great charity.'

The trio is already into day three of its 760 kilometre trek, saw them conquer Col du Tourmalet, famously the highest road in the central Pyrenees, ascending 1,450 metres up in a single push. The event should span four days in total with nine to 10 hours in the saddle each day, then a final push of four hours on the last morning.

'After two days in the saddle, it has proven to be the physical challenge we hoped it would be,' Musto said last night, almost halfway through the ride. 'It's pushed us to our limits on both days, and we still have three days to do. A tough week.'