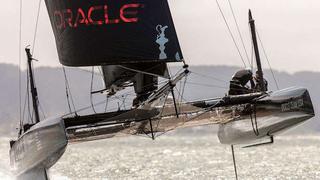 Oracle Team USA and the five challenger teams have agreed to convert the existing fleet of AC45 catamarans into hydrofoiling catamarans for racing in the America’s Cup World Series (ACWS).

To do anything else would have drawn criticism of not keeping up with the times. Since the foiling spectacle of the 2013 America's Cup in San Francisco, the professional sailing world has been going hydrofoiling crazy.

Sailors on the Cup teams have been encouraged to go Moth sailing, and indeed Artemis Racing’s helmsman Nathan Outteridge recently won the International Moth World Championships in the UK. Others have been desperate to gain experience on the Great Cup circuit which uses foiling GC32 catamarans.

It was a GC32, Richard Mille, that took line honours in the JP Morgan Round the Island Race earlier this summer in the Solent. As for the AC45s, some teams such as Artemis already have experience of converting such a craft to foiling.

It’s good news for the Cup that the teams have been able to agree on something after a year of little progress. Even more impressive is that the teams have committed to continue racing the foiling AC45s on the America’s Cup World Series circuit in 2018, the year after the 35th Cup will have taken place.

If this proves to be the case, it will be a rare example of continuity taking place in an event that tends to lurch from one edition to the next with all the momentum lost from one Cup to the next. Here’s hoping that the teams - and whoever wins the next Cup - prove capable of keeping to their pledge.