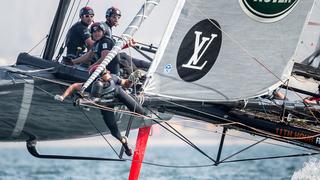 We were invited out to Oman by Land Rover BAR to gain a behind the scenes insight into the racing.

Day one saw light wind conditions, with multiple passes, penalties and position changes. With a third and two firsts, Land Rover BAR were top of the leaderboard after three races, and we spoke to the team to gauge their reaction on the first day, as well as looking forward to Super Sunday.

“We had a couple of close calls today. When the wind is light it is so variable and there are many routes that can get you to the windward mark,” said Giles Scott, tactician for Land Rover BAR. “Sometimes Ben and I don’t agree but it's important to keep those discussions brief."

"We’ve had a really great day today and we are happy with the way we're sailing," added Scott. "We were good at staying clean, staying out of the boat-on-boat battles and just being in a position to minimise our manoeuvres.”

“We got hit by the French team in the first race and had a bad start,” said Sir Ben Ainslie, “but we were able to catch up throughout the race. It’s all about teamwork in those conditions and the crew did a really good job. The second start was better, it is important to try and get away from the other boats because otherwise you are slowing each other down."

"We haven’t raced for quite a while so to have a good day was a good confidence boost," explained Ainslie after the first day of racing. "Giles and myself are working well together on the tactical decisions. It’s really open with the points that count double, it was great to have a good day today but it really is important to get it right tomorrow."

"We made a few mistakes today with the boat handling so we can try and improve for sure," added Ainslie. "The starts are also critical, get a good position and a good start and that makes life a whole lot easier. We know we can do it, we just have to go out and perform."

As Ainslie said, with double points on offer on Super Sunday it was all to play for. Land Rover BAR was over the start line in two of the three races and had to battle back through the fleet to stand a chance of overall victory.

In a dramatic final race the overall leaderboard continued to change as all six boats traded positions. Groupama Team France came through to take their first World Series race win ahead of Oracle, who needed Land Rover BAR to come fourth or worse to take the event win. But as Artemis Racing and Softbank Team Japan dropped back, Land Rover BAR came through into third. This comeback by the British team was just enough to take the overall win by two points from Oracle Team USA.

The next World Series event is in New York in May, before racing heads to Chicago in June.