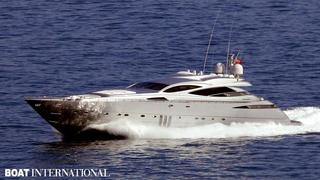 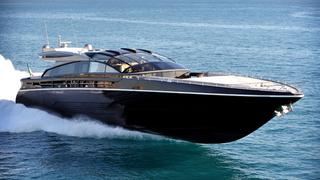 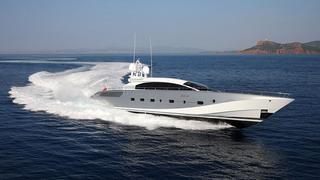 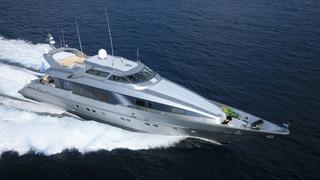 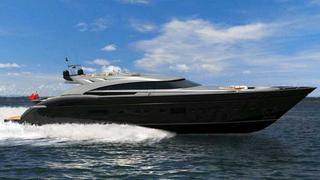 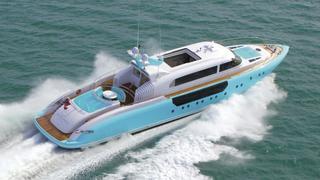 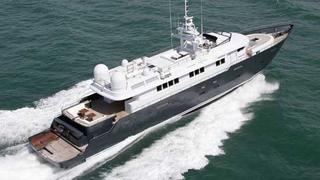 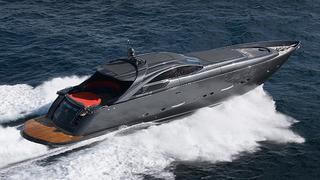 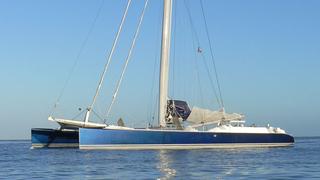 Powerful, showy and thrilling, these boats are all about getting places – at speed. Perfect for short day cruises, weekends away or just opening the throttles at sea for the sheer joy of it. The era of austerity and rocketing fuel prices may have dampened the ardour of some for these speed demons, but with their sleek, sporty looks and unabashed power they still hold immense appeal. Moreover, these kind of yachts are often ground-breakers, whether it be hull design, build technology, new materials or fuel efficiency, so the fuel bill may not be as high as you fear.

And while top speeds can be impressive, they are more likely to be reserved for special occasions. More important for normal operation is performance at cruising power and range, so they really come into their own as dayboats and weekenders. Take your pick from this powerful pack, and start planning your Friday getaway…

When a yacht takes the name of a strong wind, you can guess that her performance is going to be promising and this Pershing 115 does not disappoint, delivering a blistering 52 knots thanks to 12,500hp from twin Codag MTU engines and triple waterjets. She cruises at a no less impressive 47 knots, and comes with oodles of Italian style courtesy of Fulvio de Simoni, who was responsible for her naval architecture, styling and interior.

One of the fastest luxury yachts in the world, the 30 metre Mirage tops out at 50 knots thanks to her three 2,430 hp MTU engines coupled with Arneson drives. She is fleet of looks too with an immense glass windshield that flows back to the open deck space, a sleek black hull and low-riding superstructure, with a flybridge that melds into the yacht’s lines. Launched in 2010, she is the second Baia 100 to be built and accommodates up to 10 guests in suitably slick style.

This 38 metre carbon flyer packs a punch with her 48 knot speed, but that’s only from the standard configuration of twin 16 cylinder MTU engines. With space for 20 cylinder engines, her innovative hull has been tank-tested all the way up to 65 knots. Combined with an ultra-light, pared-back Scandinavian style, acres of glass and tip-top technology, Shooting Star is one fast lady.

Built by Heesen for the Sultan of Brunei in 1995, Daloli (ex-AA Absolute) has some superlatives to her name. Her 16 cylinder MTU engines are boosted by triple waterjets and can push her to a no-holds-barred 54 knots, while at a cracking cruising speed of 37 knots she has a range of 1,000 nautical miles. Performance is matched by an ultra-modern interior, of course.

Speed is obviously a priority when a yacht such built using the light, strong materials and technology developed for the aerospace industry, but it is not the sole raison d’etre of the AB 116, for these innovations also eliminate vibrations, making the ride smooth even at 50 knots. Power comes from triple 2,400hp MTUs linked to water-jet drives.

Styled by Espen Øino and built by Danish Yachts in 2006 for the owner of Princess Mariana, Moon Goddess - now listed for sale with Burgess - was in many respects the predecessor of Shooting Star. The carbon fibre open sports yacht is light and manoeuvrable, with 16 cylinder MTU diesels driving twin water jets for speeds of up to 53 knots.

The need for speed prescribed this unique New Zealand-built 37 metre superyacht’s power systems, design and construction – a whole new class of ultra-light technology. She was built specifically for getting to weekend destinations fast, and that means faster than a Force 10 wind at her 55 knot top speed. She also copes with any seas and with her extended ocean range of 2,300 nautical miles at 30 knots, the world could be your oyster almost every weekend. Ermis2 is now listed for sale with Ocean Independence.

One of a kind, One More Toy is the only Pershing Pininfarina Limited Edition in the world, and with those Italian car designer credentials her styling is appropriately reminiscent of fast cars, right down to the Ferrari red leather interiors and Ferrari Grigio Silverstone paint job. With throttles open she tops 42 knots and cruises at a cracking 35.

And if you are looking for speed without fuel consumption, here’s a super sailer that would leave the average superyacht in its wake.

The world’s fastest sailing catamaran – formerly known as Orange and more recently Gitana 13 – has been converted into a fast cruiser that is still capable of 30 knots under sail. She has set quite a precedent for gobbling up nautical miles – taking 43 days to sail New York to San Francisco, 11 days from San Francisco to Yokohama and 41 days from Hong Kong to London. Maybe a bit more than a weekender, but still an exhilarating ride without regard for the price of fuel.