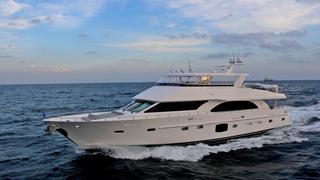 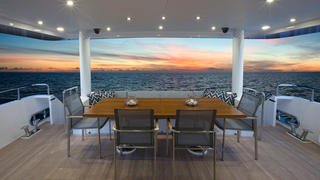 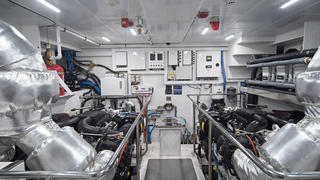 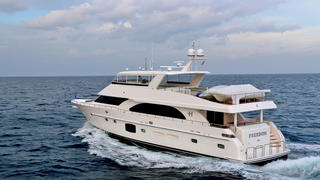 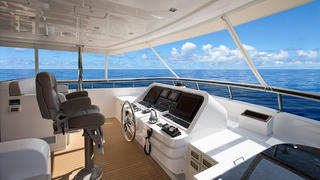 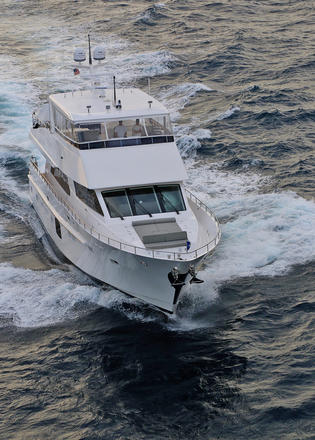 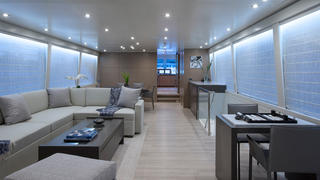 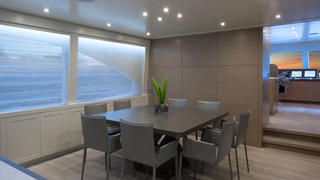 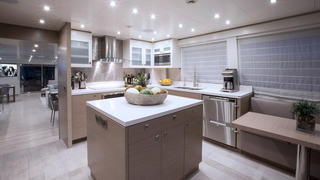 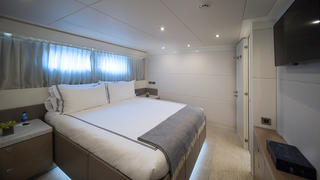 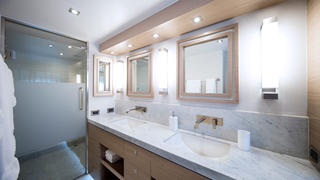 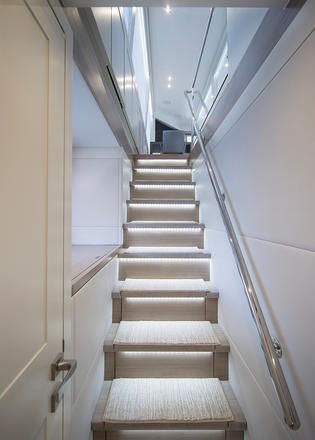 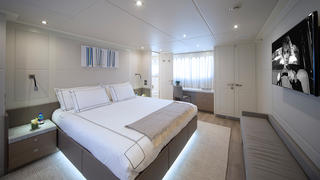 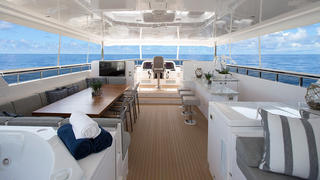 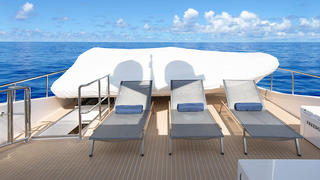 There comes a time in every fisherman’s life when the comforts and cruising capabilities of a large motor yacht become hard to resist.

About five years ago, that happened to a lifelong US Atlantic Seaboard boater and angler who had owned at least eight convertibles since reaching adulthood, including a custom 16 metre Buddy Davis, an 19 metre Ocean, and a custom 23 metre Scully finished by Bayliss Boatworks.

He went in search of his dream cruiser and spent two-and-a-half years evaluating motoryacht models from myriad shipyards. “I looked at everything, and I never saw what I wanted,” he explains.

Ultimately, Hargrave Custom Yachts of Fort Lauderdale came out on top. “In this size range, I enjoyed the fact that they were a truly custom boat builder. They gave me exactly what I wanted,” he says, adding that he also liked “to deal with somebody in Fort Lauderdale, not somebody in Taiwan or Italy”.

Take a closer look at the Hargrave motor yacht Freedom

After a year of design work — in which the owner, his wife and their captain participated fully — and about a 20-month build time, they took delivery of their new 29 metre Hargrave motor yacht, Freedom, in spring 2016. After a maiden cruise to the Bahamas, she spent the summer in New York and New England, with the owners living aboard for five weeks. We finally caught up with them at the 2016 Fort Lauderdale International Boat Show in November.

“People can’t believe Freedom is just 29 metres — they think she's bigger,” the owner proudly says. Of course, we’ve all heard that statement from new yacht owners, but after taking a tour at the Fort Lauderdale show, we had to admit it was true.

Part of the reason for this is that Freedom features an all-new hull form designed by naval architect Jack Sarin that has a 6.7 metre beam and exponential volume, inside and out. Also notable is the amount of concealed storage Hargrave has cleverly designed into Freedom, particularly in the staterooms and the galley, which features a large, pull-out pantry.

The owner and his wife collaborated on Freedom’s custom interior design with Hargrave specialist Shelley DiCondina of Yacht Interiors by Shelley. “Shelley was an integral part of the project,” says the owner. “She was very excited to work on a casual, contemporary, somewhat minimalistic design.”

DiCondina also enjoyed the process. “The owner of this yacht is a developer with a very keen sense of contemporary architecture and design,” she reveals. “He knew what the yacht was going to look like when we had our first meeting and a blank piece of paper. He and his wife wanted Freedom to be reflective of their minimalist and tailored taste.”

“My wife and I are not pretentious people. We are casual people,” the owner explains. “We never understood why people made their boats feel smaller with all the décor and furnishings.” He added they also had had Freedom’s eventual resale in mind when they worked on the interior design, which led to using mainly loose furniture instead of built-in units.

On the main deck, the owner worked with Hargrave’s design team to lower the saloon windows four inches beyond the builder’s normal level, and they added a few inches of headroom to the main deck as well. Not only are the saloon and dining area open to one another (which has become ‘par for the course’ for many new yachts), but the layout also incorporates a central passageway forward to the helm and galley that offers open sightlines from the saloon’s aft sliding doors all the way through to the windshield.

The interior hues are soft and neutral, and design accents are subtle but effective; for example, the forward bulkhead wall and some of the cabinetry have a horizontal-grain veneer instead of vertical. The saloon’s headliner is solid and un-fussy. “We liked the nice clean look,” the owner adds.

There is no wall-to-wall carpet; instead, they picked a manufactured wood flooring by Balterio in Misty Oak and placed a linen-coloured area rug beneath the saloon seating. “We didn’t want to have to yell at people not to walk in with their feet wet,” says the owner. The lack of carpeting meant that Hargrave needed to give Freedom an even more robust sound-deadening package, however.

Forward of the bulkhead lies the galley, which features a white silestone-topped island and settee with table. It could be described as a “country kitchen”, but its chic, urban styling makes it look like the exact opposite.

The owner deleted some side cabinets from the original plans in order to preserve the natural light coming in from the windows. His wife selected the appliances and does most of the cooking onboard. The couple plans to bring along a freelance chef only when needed.

“The boat is designed to be run from the flybridge, but I wanted to make sure we had a lower helm with good visibility,” the owner says. Served by a comfortable Stidd helm chair, this helm station is fully equipped with instrumentation, including a Furuno 2014 MFDBB black box system.

There is a pantograph door to the side deck, as well as interior stairs to the deck above. The galley settee is long enough for someone to lie down on while on anchor watch. “I’m a boater. I wanted it to be practical,” he adds.

Stairs lead down from the lower helm to three of Freedom’s four ensuite staterooms: the forward VIP, starboard VIP, and port cabin with twin berths that convert to a queen.

Clever space-planning and the use of low cabinetry make these guest cabins feel truly spacious, while the décor, featuring shades of white, taupe and light gray, along with crisp white linens and large portholes, create a clean, bright ambiance. DiCondina set up an LED light in her design studio that matched those used aboard the so she could work effectively with such a subtle colour palette.

The owner’s cabin is accessed via a separate stairway from the saloon. “We wanted our own private entrance to the master — and we wanted a porthole [by the stairs],” the owner said. “That was one of my wife’s pet peeves that she hated on my fishing boats. She called [going below], ‘going into a hole.’”

The owner’s suite is full-beam; large enough to incorporate a long bench seat opposite the berth. The head has twin sinks and a huge shower with textured tile. But though the owner’s accommodations are larger than the guest cabins, they are furnished in the same minimalistic style, accented by white Carrera marble countertops rather than more exotic stonework.

"We don't live formally at home — why would we live formally on a boat?" asks the owner. "We wanted it to look like a beach villa in Greece." In addition to the porthole on the stairway, he added a large one in the shower. "When we're somewhere beautiful, we open up the windows and we're right in the middle of the ocean."

Leading the way up to the flybridge deck, he praised the builder’s sense of ergonomics. "Hargrave is really careful about making stairs that are not too steep or narrow," he says.

Once we arrive at the upper deck, which is sheltered by a large hard top, it’s easy to anticipate the owner’s next words: “This is where everyone hangs out.”

The flybridge helm is raised for optimal visibility. It is flanked by two settees where guests can comfortably watch the waters ahead. Two steps down, the flybridge encompasses a granite-topped bar with refrigerator and grill, and a large dining table. “We served 18 people sitting down here on my birthday,” the owner boasts. The deck can be air-conditioned all the way back to the end of the hard top.

Behind dining and bar area is a sunlounge and a six-person superyacht hot tub — impressive on a 29 metre. Even more so is the size of the boat deck aft, occupied by a five metre AB RIB tender and its davit, with room to spare for kayaks and paddleboards. “We don't even have to launch the tender to use chairs back here,” the owner says.

When a 29 metre yacht “feels like a much larger boat,” utility and crew spaces sometimes have been sacrificed. Not so on Freedom. The crew quarters in the transom area are laid out with just as much care as the guest accommodations.

“I wanted two heads and a little lounge area,” the owner explains. The captain has a double-berth cabin and en-suite head, and there is a bunkroom for two served by a second head. If accommodations are needed for yet another crew member, the lounge settee converts to a berth and has a curtain for privacy.

The engine room, forward, boasts 2.3 metre headroom. It is well air-conditioned and has a CCTV system. There is ample space to service the twin Caterpillar C32s diesels, which give Freedom a top speed of 24 knots and an easy cruise of 18 knots, according to the owner. “It’s not like the old fishing world, when we ran 30 knots everywhere,” he said. Still, he hasn’t given up his angling habit entirely — fishing rod racks have been built into the engine room headliner and there are rod holders in the transom.

“Hargrave is whatever you want. It’s a completely custom boat,” he repeats with a smile. “But they keep me under control to make sure I don’t do anything stupid.”