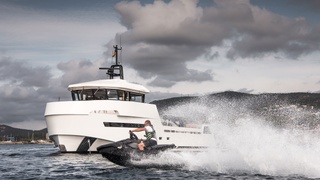 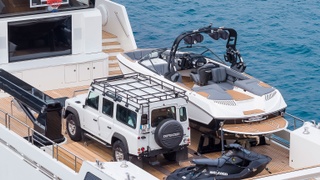 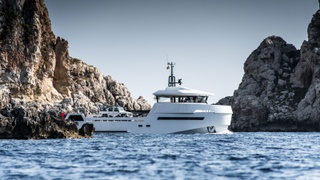 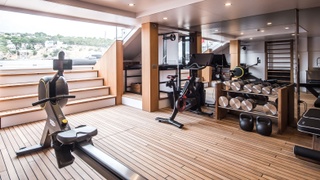 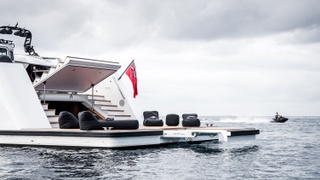 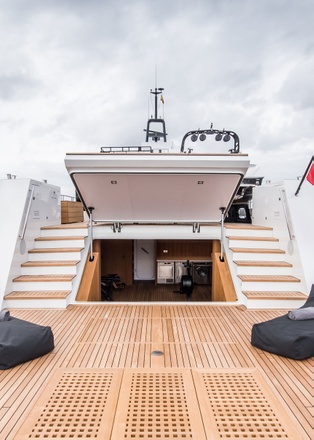 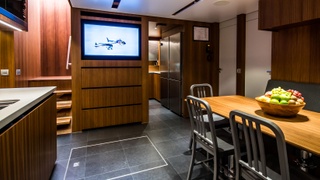 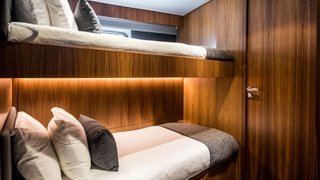 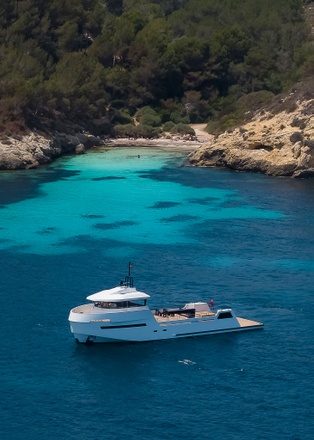 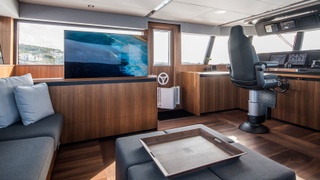 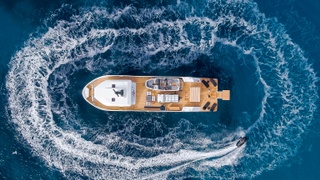 On Board the Lynx Yachts YXT 24 Evolution Support Vessel

When you need more space at sea for family and fun, you can always buy a bigger boat. But one sport-loving owner looked to Lynx Yachts for support – or rather its new 27-metre support vessel, says Andrew Johansson

Many a superyacht owner has gazed longingly at a rank of shiny new jet skis and wished their tender garage was just a few metres longer. With its Yacht-X-Tender (YXT) range, Lynx Yachts set out to give those owners extra space for storage and entertainment without having to engage in a refit or shell out for a new, larger yacht. Support vessels are usually rather big, but in 2014 Lynx debuted this range with YXT One, a 24-metre support boat with numerous possibilities for use and customisation. It is a concept that has driven the shipyard to develop additional models, including the first 27.1-metre YXT 24 Evolution.

Based on the 26.3-metre YXT 24, the Evolution model – as the name suggests – has grown beyond the brief of the original, most noticeably in length, with just under a metre added to accommodate a more substantial beach club. It is an important area for the private Californian owner, but not for the reasons one might think.

“It was clear from the first meeting I had with the client that he is a very active person who loves sport and is gifted with a strong aesthetic sense,” says Filippo Rossi, sales and marketing manager for Lynx Yachts, as we sit near the yard in Nijkerk, nearly 50 kilometres south-east of Amsterdam. The client owned a 27.3-metre WallyAce called Wally Casa, but needed more space.

To facilitate the owner’s passion for sport, in particular surfing, Lynx collaborated with exterior designer Bernd Weel to adapt the YXT 24 platform to accommodate the client’s surfboards – as well as create a large beach club to entertain guests. The new design includes steps on the stern hatch (which encloses the surf kit, linen stores and gym) to create a stadium-like set-up from which friends and family can watch those surfing behind the shadow vessel.

Inside, a capacious steam room and shower is only a few steps from the racks of surfboards, while opposite there is a twin suite with a Pullman for guests, instructors or staff. Crew are catered for in two twin en-suite cabins towards the bow that connect directly to the galley, pantry and provisions store. On the water, meanwhile, an Opacmare transformer platform at the stern enhances the beach club atmosphere. “When you look at YXT One, it was closed and didn’t have a big platform aft of the vessel,” says Weel. “So to have it on this vessel is a very positive feature. It brings you so much closer to the water than with previous models.”

This is the first project that Lynx has worked on with Weel. The young Dutchman has been sympathetic to the YXT design language first penned by Diana Yacht Design, which acted as naval architect on the 24 Evolution, while adding new stylistic features that work in harmony with the rest of the YXT line. Most notable is what the designer calls the cradle. “With the wheelhouse forward and large air intakes aft of the vessel, I wanted to create a cradle for the tenders that are stowed on deck,” says Weel.

“When you look at the bulwarks, you can see how the sheerline dips before rising again to meet the wheelhouse, creating a shape that is similar to a cradle.”

The designer explains how the combination of a wide beam, full-width staircase, and the use of black on white in strategic places such as around the air vents, on the crane, on the helicopter pad and on the tender chocks, help to create a strong visual stance. The optional teak decking rather than the standard composite adds warmth and texture underfoot.

The Lynx Yachts YXT 24 Evolution has a massive swim platform, which leads into the gym

When all the toys on the 75-square-metre open deck are launched, inflatable furniture can be set up to provide seating. Alternatively, guests who tire of playing on the water can compete at basketball in this space, thanks to a hoop fitted to the top of the wheelhouse.

The versatility of this area means that it can accommodate a variety of toys. These could include an ultralight helicopter or a submarine but, in the case of this owner, the largest unit is a Land Rover Defender 110 fitted with custom lifting points, allowing crew to deploy or retrieve it using the onboard crane. It is accompanied by a Super Air Nautique G23 wake boat and a Sea-Doo jet ski. Anchor points strategically fitted on deck allow crew to stow equipment wherever it fits best, providing useful flexibility if and when toys are replaced.

“Lynx Yachts was clearly eager to push its initial [YXT 24] project to the next level,” says the owner’s representative, Vincent Grandmaison. “Being bound to a specific length, there were countless modifications to the GA with key improvements each time. I think this version of the YXT has been developed to its fullest potential.”

The interior of the Lynx Yachts YXT 24 Evolution

Details such as these along with the addition of a guest cabin and generous steam room and shower increased the price tag. The final result, however, is worth the cost as Wally Shadow is a cut above purely practical support vessels, which often lack fairing or clean finishing. Lynx Yachts’ first delivery of this model gives its owner the sporty on-water lifestyle he desires, without having to spend significant sums to obtain it.

This fact may explain the growing interest in the YXT 24 Evolution platform – the second model in the series is due to be delivered towards the end of 2019. “This owner [of hull No 2] already has a 48 metre and again, he is active and keeps fit,” says Rossi. “We have enquiries from Europe and the US for this size of boat and bigger, up to around the 30-metre mark. A typical client looking for a shadow vessel like the YXT 24 Evolution is usually a sporty person.”

The Italian salesman explains that those looking for larger support vessels, around 40 metres and bigger, tend to want the vessel to carry bigger toys and aren’t so interested in engaging in watersports. However, this is not the target market for the shipyard, as it continues to grow interest in its lines while remaining competitive on price and value. It’s yet another successful extension for this innovative brand.

Careful calculations were required to achieve this as Hans-Maarten Bais, at Diana Yacht Design, explains. “The naval architecture of the YXT series has been a challenge,” he says. “The load on the deck varies a lot [on the YXT 24 Evolution] and with that, the trim. When the boat sits in the water without tenders on board, it has to float nicely.”

Then there is the issue of stability when moving large, heavy objects on and off the vessel. “Launching the tenders or car with the large crane was a challenging design feature. We carried out extensive calculations to avoid the boat rolling too much, so that people wouldn’t feel scared the boat would tip over.”

For the client, it was important that his shadow vessel should have a similar feel and finish to that of his existing vessel. This responsibility fell to French interior design studio Darnet Design, which had the task of matching materials and reflecting the finish of Wally Casa in the owner’s new shadow vessel, christened Wally Shadow.

The mothership’s walnut veneer walls and grey flooring and fabrics have been used throughout the boat. Modern materials such as carbon fibre also make the occasional appearance. “The similarities of the interior go beyond finishes and can be seen in details such as the bevelled edges of the counters around the wheelhouse,” says Rossi. “This feature was inspired by the interior of Wally Casa, as was the use of carbon fibre around the helm.”

When it comes to selling the idea of a new build, nobody is better qualified than a designer. Alongside the ability to produce strong explanatory visuals of the item they envisage, the truly successful have mastered the art of listening. The focus of Filippo Rossi’s sales strategy is simple in theory: listen and deliver. When this is combined with the ability to sketch, a skill he acquired earlier in his career as an architect, the sales process becomes more interesting and therefore more likely to succeed.

“If you listen carefully to the client, then it is easy but you also have to effectively and accurately relay that information to your team, otherwise you lose the essence of what the client wants,” says Rossi. “It’s in those first few meetings with them that you get the real idea.”

The Italian goes on to explain that as a project begins to grow, valuable input from other players such as engineers, surveyors and so on, can dilute the original idea – so it’s vital to keep everyone coming back to that concept. “I still have the original report and sketches that I made following the first meeting I had with the client when we sat down in Porto Cervo,” he says. “The boat we have made is the same as the one I wrote about in my report, exactly.”