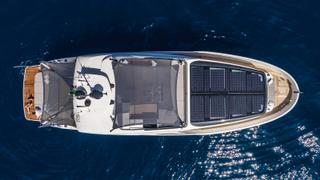 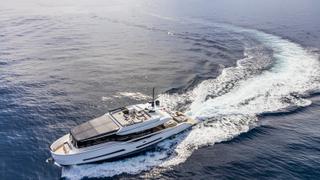 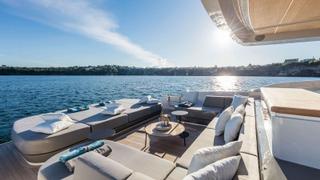 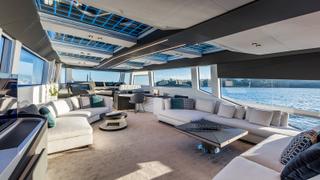 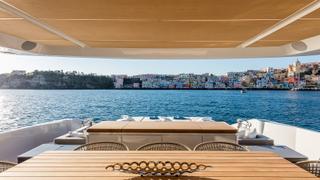 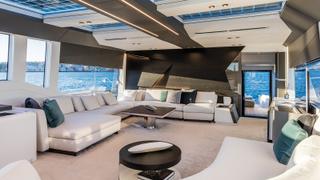 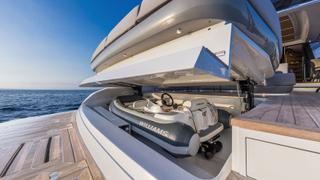 One: Inside the first-born of ISA Yachts’ new Extra range

The rear view is not always the best introduction to a boat, the dominant feature usually a transom door flanked by stairs with maybe the yacht’s name in a jaunty font. One, the first of ISA Yachts’ new Extra line, is refreshingly different: she seems an open book, eager to be read. Moored stern-to along the dock surrounding a marina in the heart of Viareggio, Italy, she flaunts an inviting expanse of blonde teak and grey cushioning that extends from a sun-drenched transformer into a shaded section under the flybridge overhang. Her signature is emblazoned discreetly in polished steel on the back of an enticing bar.

Eager to see more, I step across the teak of the passerelle over dark water, before hopping onto the yacht’s sturdy open deck. With the Tuscan sun beating down, the wheat coloured teak boards below my feet feel warm. A breeze brushes across the 50 square metres of this two-tier open area with its sunpad, low loungers dressed with casually tossed pillows, a dining table with teak top matching the finish of the overhang above it and a central built-in bar.

I resist the urge to lay out on the sunpad and start exploring. Peeking under the bar’s teak top and expecting to find the usual grill or electric hob, I am surprised to find a DJ set tucked above the fridge and ice maker. It may be temporary, as the boat was delivered to her owner only a couple of weeks before (she was sold during construction) but it is in perfect accordance with the personality of this first hull of a new range designed by Francesco Guida for ISA Yachts. “This boat is loaded with options,” says Francesco Carbone, ISA Yachts’ general manager. “The same team that builds the 50, 60 and 70 metre boats built this. It is not like a serial production boat trying to optimise everything. It is different. It has been designed to be a family boat, or a group or party boat with space to accommodate a lot of people. You can see easily 25 people outside and they can all be seated.”

There are eight of us on board the boat, which is just 24 metres in length, and we are at no risk of stepping on each other’s toes. I have seen boats of this size with people standing elbow to elbow, sitting on tables or crowded precariously on the foredeck. With its big open deck, this is a much more suitable platform for a group outing. One, though, is more than a party boat, it’s a yacht with amazing style and, surprise, a tender garage. The sunpad I was sizing up seconds earlier starts moving up quietly; I notice a crew member operating a switch on the coaming. Under the cushion’s base and the teak decking, which lift smoothly as one block, is a 3.3 metre Williams jet tender neatly tucked sideways alongside the small crane that lifts and spins it over the teak bathing platform.

A tender garage on this boat is especially surprising given that the lower deck has four guest cabins (other configurations are available), including a large master cabin with full-beam en suite insulating it from the compact engine room behind it.

The yard was able to create this tender garage owing to the compact nature of the Volvo Penta IPS propulsion system fitted in the semi-planing hull, built in fibreglass. The primary motivation for the propulsion choice was comfort and efficiency to match the boat’s personality, plus ease of use, so it’s a bonus that the space-saving feature allows for the garage. The two Volvo 1050 engines yield a top speed of 19 knots and are fuel efficient at cruising speed, giving this boat a range of approximately 700 nautical miles, enough to take the party way offshore.

Guida ticks off the Extra’s main distinguishing features as “very large living spaces, low consumption at middle/intermediate speed and very high range”. One additional goal was “to preserve ISA Yachts’ strongest points, namely the highest level of construction quality and the comfort offered both at anchor and during navigation and, last but not least, the unmistakable ‘Made in Italy’ mark.” I can vouch for the yacht’s Italian style – there is oodles of it, from custom-made pieces to some of the who’s-who of Italian furniture and accessory design – and for the quiet ambience at anchor. Unfortunately, there is no opportunity to take the boat out for a blast.

But at the dock or at anchor, one of the yacht’s strengths is without a doubt the amazing space. “The maximum beam is 6.8 metres, almost one metre wider than other boats of the same length,” Carbone says. “The idea was to have big indoor and outdoor space on the same level, and the same space in the cockpit and in the saloon – it is really huge.”

The layout of One’s main deck yields a couple more surprises: between the vast saloon and the outdoor dining area is a central galley. Rather than a diminutive bar-cum-sink configuration tucked into one side, which is a common solution on a boat of this size, the galley stretches proudly across the middle, separated from the aft deck by sliding tinted glass. There is room for a small crew on this boat, housed in a space accessed from a forward hatch in the forepeak, but the 76 Extra can be handled with minimal exterior help. If owners decide to skip the chef on an overnight trip and handle the cooking themselves, they will still feel part of the party.

To the port side of the galley is the entrance to the main saloon, covered in a dark leather by Foglizzo, and steps down to the lower deck cabins. The main feature in the saloon could be the open space. It’s not often you find a designer bold enough to leave so much square footage free of furniture or built-ins – and there is no formal dining area. Sunlight shines through the glass ceiling to project the square patterns of the photovoltaic cells covering it onto a plush carpet by Supertuft. The cells sourced from Ertex Solar generate just enough power (about 4kW) to run a few appliances and lights so that, in temperate weather, it’s possible to shut the generators off at night.

The low white sofas by Minotti, cocktail tables around the perimeter and the simple colour scheme would not be out of place in a fashionable nightclub, minus perhaps the saxophone-heavy smooth jazz flowing from discreet speakers. The main difference from a land-based club is the pilothouse, an elegant composition of electronics and large screens, custom made by ISA Yachts with Garmin technology. Side-Power thrusters and multiple cameras assist in manoeuvring.

The designer chose all colours, furniture and décor, down to specially made containers for nail polish and stylish boxes holding products from Bulgari. Some unexpected touches in the cohesive, soft décor include wall mounted industrial-looking reading lamps flanking the bed in the forward VIP cabin and an overhead in aluminium in the cabins.

Guida, a designer with a degree in naval engineering, knows the shipyard business well; he was a partner at Sanlorenzo up to 2002 and he co-founded Arcadia Yachts. He has also collaborated with a variety of builders, more recently Azimut, Cantiere delle Marche and now Columbus Yachts, which is newly related to the revived ISA Yachts through ownership. The Palumbo Group, originally from Naples and the parent company of Columbus Yachts, bought ISA Yachts’ assets during a dynamic expansion phase in 2016. Embroiled in financial difficulties, ISA had shut its doors after the launch of such noteworthy yachts as 66.4 metre Okto.

Since reopening under new ownership, it has delivered 36.5 metre Clorinda, with an alluring interior by Guida, and has introduced a full range of new designs from planing to full displacement yachts. The Extra range (short for extraordinary) is meant to fit somewhere in between, says Guida, who also designed the interior of the 80 metre Columbus under construction at ISA’s facility in Ancona on the Adriatic coast. The yard has designed the first ISA Extra for “a refined sea lover looking for something special and not too big (initially) but who has the potential to step up,” says Carbone. The starting price in this case is €3.75m, excluding options and taxes.

The designer, who hails from southern Italy, knows the yard’s CEO Giuseppe Palumbo well. “My favourite place to go boating is Capri, an unrivalled spot for panoramas, clear water and corners to be discovered. It is the sea where I grew up and it is where I meet quite often with Giuseppe Palumbo to talk about future projects, something we never get bored of doing,” he says.

Over his many years in the yachting industry, he’s become known as an innovator. He describes his style as “essentially a simple design and always imbued with marine influences”. However, he always thrives to preserve a brand’s identity. The Extra is reminiscent of other ISA yachts in several ways. “The sequence of the living areas available in the cockpit recalls that of the ISA Sport 120 – sunbed/living/dining – a layout which has been very successful over the years.”

Since One, developed closely with Palumbo, was sold during her construction, ISA Yachts has announced the sale of another 126 and a 93 in the same line. They look quite different from the smaller sistership, and the larger boats in the range will be built in aluminium rather than fibreglass, but they follow the same principles: generous space, efficient cruising and convivial living. “The series is really taking off. It looks like there is a demand for people looking for something different and for volume that they won’t get in the same length on another boat,” Carbone says.

But one of this first ISA Extra’s loveliest spots is one that won’t even be counted in that volume: most of the time, navigation will be handled from the helm on the upper deck. A steep staircase with wide teak steps, protected from the outside elements by a sliding glass door on the main deck and a sliding hatch, leads to the compact but very well thought out flybridge deck. The design did not sacrifice safety for aesthetics, and a handy (and elegant) banister helps negotiate the verticality. A bimini stretched over carbon poles (which can remain in place up to about 12 knots) shades the helm station and two pilot seats. A long cushion wraps around the front of the screens, an invitation to stretch out in the sun. An additional bar with ice maker is tucked next to a compact table and seating arrangement, a perfect spot to enjoy – what else on a boat this steeped in Italian style? – a traditional aperitivo.

First published in the August 2018 edition of Boat International.