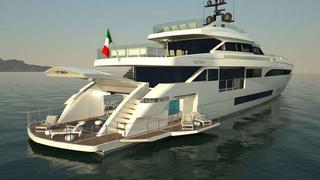 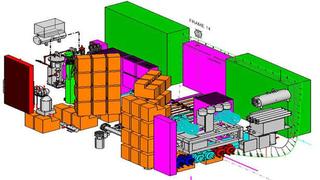 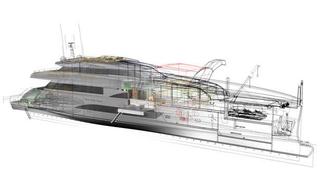 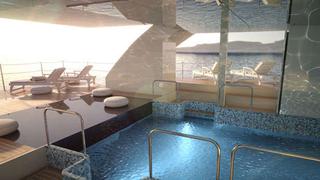 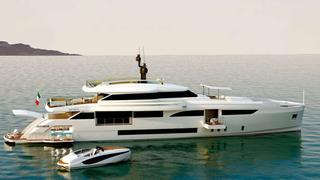 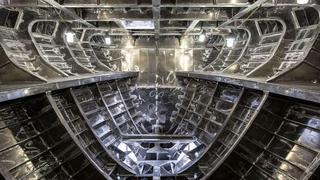 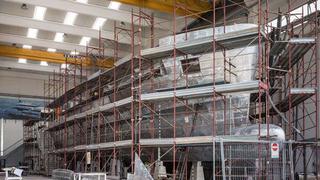 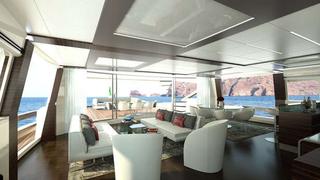 After catching the yachting world’s attention in 2012 with the surprising and innovative Wider 42, Tilli Antonelli, founder and CEO of the Wider yard, is again pushing back the boundaries. Stepping into superyacht territory he has built a vessel at once novel, efficient, functional, enjoyable and eye-catching. Asked what sets the Wider 150 apart from the competition, the Italian answers: ‘Everything.’

The Wider 150 concept was first presented during the 2011 Monaco Yacht Show, but has since undergone significant changes and improvements. The original plan was to build in composite, a material familiar to both Antonelli and designer Fulvio De Simoni, who has designed the whole Wider range. But it was decided aluminium would better fit the project’s overall philosophy and offer more design advantages.

Antonelli tells BI: ‘The key points to the project were a medium-sized dimension; contemporary yet timeless style; low consumption diesel-electric advanced propulsion coupled to Azipods; and a layout that breaks the rules for its unconventional use of spaces, namely the beach club area/tender garage, which was one of the ideas the project developed from. Our aim was to build an efficient displacement yacht in all respects and the Wider 150, with a length of 46 metres, a beam of 8.53 and a maximum draught of less than two metres, while offering an array of amenities and large liveable spaces, can also hug the coast and enter small harbours, marinas and bays.’

Diesel-electric propulsion was chosen not only because it offers reliability and efficiency, but also for the comfort and convenience it provides. The system is modular and features great flexibility thanks to four variable-speed diesel generators that can operate independently. All the energy sources are managed by the Wider Management System that controls the power supplied by the generators, shore-power and battery packs, distributing it among all the onboard systems. Touchscreen pads will be positioned on board so the captain or owner can choose the operational mode, from zero emission using only the battery packs, up to top speed with all four generators online.

‘Whatever the cruising mode, the fuel consumption levels are very low. She can cruise smoothly and silently in zero emission mode, on battery power alone, for eight hours at five knots,’ Antonelli says proudly.

‘Conventional yachts run generators at a fixed speed, burning fuel at a fixed rate, regardless of the load,’ he continues. Wider’s system runs at the speed necessary in that very moment. The current created by the generators will power both the propulsion and the hotel systems on board. Any excess power recharges 52 lithium polymer batteries.’

One main goal was to reduce the fuel consumption through better propulsive efficiency. The Wider’s Azipods, coupled to electric engines delivering 531kW each, feature two contra-rotating propellers that help increase efficiency by about 10 per cent while granting excellent course-keeping and manoeuvrability. This also leads to a long service interval, reduced noise and vibration and an increased range of about 4,200 nautical miles at 11 knots. At the 150’s top speed of 15 knots, the yacht can navigate non-stop for 2,000 nautical miles.

‘Since energy is carried by cable to the Azipods, there was no need for a large engine room amidships,’ Antonelli explains. ‘On the Wider 150, by splitting the technical areas between the bow and stern, 25 per cent more space is left for the guest cabins and the yacht can host a [9.7 metre] tender in the stern garage.’ The generator room is at the bow and the battery packs are astern in two compartments on either side of the tender garage which, once the tender is out, becomes a swimming pool surrounded by a beach club.

‘I cannot say that this beach area encompassing a swimming pool is the first of its kind, but it is unique for its peculiar opening system,’ Antonelli says. ‘We have excluded a side opening as it would not have been as reliable as it is from the transom and also because we liked the idea of having a great saltwater swimming pool protected from any danger in the middle of the ocean.

‘The most challenging part was the engineering of the hatch, which we decided to make in two elements. We spent countless hours researching the most reliable and efficient mechanisms for the beach club,’ Antonelli confirms. ‘When the tender exits, the hatch opens completely, then the lower section closes again protecting what becomes a pool, while the upper segment stays open to give access and light to the beach club.’ On each side, fold-down balconies connected to the stern platform double the available space at sea level.

From the beginning, the project included a tender matching the yacht’s style and spirit. The Wider 32 superyacht tender was conceived as the Wider 150 took shape and it is as extraordinary as its mothership. Twin 260hp MerCruiser engines allow a top speed exceeding 37 knots, while the exterior styling by De Simoni leaves you in no doubt that this design has been produced to impress and perform.

When we visit the Wider 150, the V-shape of the tender bay set into the hull is clearly visible from the rear of the yacht as the stern section is still to be welded to the ship’s body. On the opposite end, the almost vertical bow ends with a protruding bulb to reduce drag. The hull shape, developed in collaboration with Sydac, makes the most of the yacht’s length and beam. For stability, five inboard Seakeeper gyroscopic stabilisers have been used instead of external fins, to further limit drag.

Inside its modern build shed, the yacht’s naked hull shows the quality of the metalwork and welds. Three of the superstructure’s five sections have been lifted into place and the interior bulkheads belowdecks secured. ‘The superstructure is divided into five sections to facilitate handling and assembling procedures,’ explains project manager Juan Jose Balaguer. Aluminium alloy 5083 was chosen for its qualities as a lightweight, strong and long-lasting material. This alloy has a weight of only 2.66 grammes per cubic centimetre compared to steel’s 7.8 grammes per cubic centimetre, giving the 46 metre yacht a displacement of just 355 tonnes.

‘Aluminium helps to lower the vessel’s environmental footprint, and it can be recycled again and again,’ Antonelli says. ‘It also provides greater freedom during construction as it increases the opportunity to customise and considerably shortens production times.’

As we climb the scaffolding to the main deck, Antonelli points out the peculiarities of the interior and exterior layout. Continuity between indoor and outdoor spaces was an issue of the utmost importance.

‘This is an approach we developed with the Wider 42,’ De Simoni says. ‘Lately, large yachts look like cruise ships where passengers are kept far away from the water, but the philosophy for the Wider 150 is mainly the same as the Wider 42. We learned to manage the interior areas more freely, focusing on attaining the greatest integration between the yacht and the surrounding environment.

‘This is a yacht with extraordinary proportions’, De Simoni points out, ‘akin to those of the elegant vessels of the beginning of the 20th Century, but with a style that follows no fashion trend, characterised by clean lines and taut, smooth surfaces.’

Throughout development, changes have been made to improve liveability and smooth exterior lines. The beam was enlarged from 7.8 to 8.53 metres, bulkheads moved for better access to upper side decks, bulwarks lowered and windows enlarged to give the interior better views.

The master suite, featuring large windows drawing in a huge amount of natural light, can be split into two separate areas by closing a sliding partition. Aft of the owner’s cabin a studio/lounge area benefits from a beautiful fold-down terrace overlooking the waves.

All Wider projects feature a moment of design magic, and on the 150 a section of foredeck raises up at the touch of a button to become a light yet robust roof protecting a properly equipped lounging area. Good spatial planning like this is a feature on the Wider 150, from the open-plan saloon on the main deck to the saloon on the upper deck (as pictured below).

‘We decided to make every effort to find the necessary resources in terms of investment, setting, structures and team, to give it a start,’ says Antonelli. ‘We presented the project in September 2011 and a year later signed the first sales contract with the Malaysian entrepreneur Tan Sri Lim Kok Thay. He was so enthusiastic about the project and the company that he became a Wider partner. This gave us the means to start construction in August 2013.’

The first Wider 150’s launch is scheduled for summer 2015. Plans to build 50m superyacht Wider 165 were announed at Miami yacht show. Something is always brewing at this exciting company, and you can expect more Wider projects to come, but details must wait. But if the Wider 32, 42 and 150 are anything to go by, Antonelli is going to keep pushing boundaries and keep hitting us with those ‘wow’ moments.