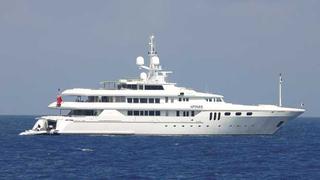 The creators of GO2 have unveiled a digital dosing pump at the Monaco Yacht Show that will make it easier to accurately administer the nanoparticle-based fuel combustion additive.

The cutting edge diesel additive, which last year won a DAME Award for the Most Eco-Friendly Product, provides a significant improvement in fuel efficiency and reduction in emissions. It thereby dramatically reduces the impact of a yacht’s engines on the environment, and offers large financial savings from increased fuel economy. It also improves onboard lifestyle by reducing soot and exhaust smells.

Previously the correct dose of GO2 had to be measured and added manually during refuelling and the pump is designed to make the process easier and extremely accurate.

‘This is a very accurate digital dosing pump, accurate down to one part per million,’ says Richard Franklin, managing director of ECOsuperyacht, which distributes GO2. ‘The ultrasonic flow metre picks up the flow of fuel and the pump proportionally adds GO2 to the fuel at whatever the flow rate is, at a ratio of 1 to 4,000, which is the optimum’.

The fuel additive was trialled last year in the 45m explorer yacht Big Fish, and the 62m yacht Apogee and is now used on 65 yachts around the world.