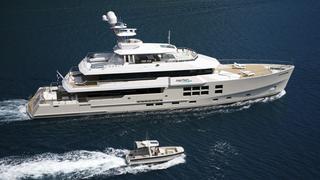 Emissions management specialist ECOsuperyacht has been chosen as the European distributor of a nanotechnology-based diesel combustion catalyst that could reduce superyacht fuel consumption by 8 to 13 per cent.

The active ingredient of GO2 is its nano-particles, measuring just 2.5 nanometres across and containing just 480 atoms each, of which 160 are Cerium Oxide.

‘The nano-particles do two things: they are an oxygen carrier and also an oxygen distributor,’ says Richard Franklin, managing director of ECOsuperyacht.

GO2’s nano-particles both contribute and redistribute oxygen within the engine chamber during combustion. GO2 also accelerates the rate of combustion as a result of the catalytic properties of its nano-particles.

In doing this, a faster, more powerful, and more complete burn occurs which requires less fuel for the same output by the engine.

Tests by the manufacturer have successfully demonstrated reductions in fuel consumption of between 8 and 13 per cent – which could equate to tens of thousands of pounds in savings a year and a substantial environmental benefit from reduced emissions.

The catalyst was developed by American nanotechnology specialist Cerion Energy and is already used in the commercial marine and rail industries in the US. This will be the first time that GO2 has been sold to the yachting market, although it has been trialled in the 45m explorer yacht Big Fish, and the 62m yacht Apogee, with results expected imminently.