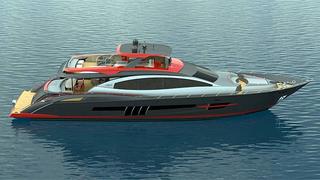 The newly designed LSX95 will replace the successful LSX92 series in 2013. Although not many details have been disclosed, the new 29 metre series is likely to retain most of the features which made her predecessor a success.

The LSX95 motor yacht will have an extended flybridge with bar, spa pool and hardtop. Dispensing with a lower helm station, the main deck will also be extended and have more interior volume.

'This is the third Lazzara yacht for this owner and it will be the best so far,' said Peter Lenton, director of sales. The yacht is scheduled to be launched within 12 months and will be based in Fort Lauderdale.