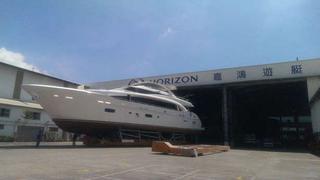 Horizon Yachts has announced that it has completed construction on its latest RP110 raised pilothouse superyacht.

The 33.5 metre superyacht is the third in the Horizon RP110 series and has just been transported to the dry dock for testing prior to her launch. She will be the first in the series to be delivered to Australia and is set to arrive in Perth this December. Her launch is currently planned for the end of September with a sea trial following in mid-October.

Like her sister yachts, the RP110 hull No 3 features design by JC Espinosa and naval architecture by Donald L Blount. Along with the series’ distinctive raised pilothouse design, she features a double chine hull for extra stability and a 1.83 metre draught making her ideal for cruising in shallow waters.

The first RP110 motoryacht launched by Horizon was superyacht Andrea VI, who was tailored to her experienced owners in America. She features four staterooms with a country kitchen and a full-beam master on the lower deck. She is powered by twin 1,935hp Caterpillar engines and can reach a top speed of 23 knots.

Horizon launched the second RP110 superyacht Carnival Liberty 3 earlier this year. Unlike Andrea VI, she has five staterooms in total with an on-deck master suite. Powered by twin 1,900hp Caterpillar engines, she has a cruising speed of 18 knots and a maximum speed of 22 knots.