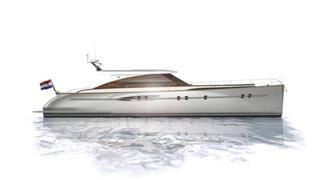 Mulder has signed the first order for a Mulder Favorite 1700 launch.

The yard, based in Zoeterwoude-Rijndijk in the Netherlands, said construction for the boat would begin mid-February and it is expected to be delivered to her Dutch owner in the spring of 2016. The 17.50 metre craft is the largest, full-aluminium model in the Favorite range and has much in common with the popular Favorite 1500, the boat which Mulder said merged into one all the best and unique features of the previous Favorite motor yachts. The range also includes 1300 and 1400 boats.

The Favorite 1700’s classic lines were developed in collaboration with Guido de Groot Design and Vripack Naval Architects. She will feature three spacious cabins, two bathrooms and a kitchen with a breakfast corner. The saloon is naturally well-lit with a glazed sliding door and an electric sliding window and sliding rooftop giving access to the aft deck. The boat has an unusual amount of storage in the stern for a three-metre tender, which can be launched via a tender slide.

The Mulder Favorite 1700’s stunning looks extend below the water, where its round-bilged hull should reach a maximum speed of 22 knots with twin engines. Extra underwater spray rails and sound and vibration insulation will increase comfort for guests. For those cruising the inland waterways, there is an electric folding mast to give an air draft of 3.40 metres.