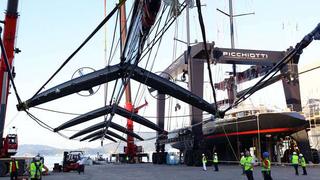 Launched in June, Perseus3 is hull No 56 in Perini Navi's sailing fleet, and she is the second hull to be launched in its new 60 metre series after hull No 1, superyacht Seahawk, which made her debut at last year's Monaco Yacht Show.

With a carbon fibre mast measuring 75.8 metres, Perseus3 has one tallest carbon fibre rigs in the world. The mast, by Future Fibres, has an optimised weight of 16.4 tonnes. According to Future Fibres, 'we have managed to produce a tube with a perfect exterior surface and a flawless Clearcote gloss Carbon finish with zero filler, which can add up to three per cent to the weight of a mast.' Perseus3's 23.4 metre carbon fibre furling boom, which features a new mandrel furling and locking system, is manufactured in pre-preg carbon to maximise weight savings and performance. She will also have an exclusive Rig Load Monitoring System, which utilises a series of strain gauges to constantly monitor the loads on her rig components.

Sails are by Doyle, and company founder Robbie Doyle calls her sail wardrobe, 'one of the most unique and challenging ever created.' Special new fabrics were created after extensive R&D to achieve the necessary strength and lightness briefed. Perseus3's sail plan exceeds 10,000 square metres, including a record-breaking large 2,602 square metre A2 sail. Perseus3 will benefit from Perini Navi's new generation of captive winches, which dramatically improve furling and sail deploying times – and therefore cut down on time to tack and gybe by more than 75 per cent over previous generation Perini Navi sailing yachts.

Perseus3 can accommodate 12 guests in five cabins, including a full beam owner's suite, which can be divided by a removable wall. She will carry two 6.2 metre custom tenders. Perini Navi has announced the sale of third 60m series yacht, to be delivered in 2016.