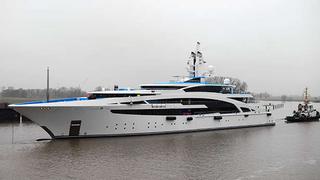 Photos of Kusch superyacht I Dynasty on the move

The recently launched Kusch superyacht I Dynasty was spotted on the move in Germany.

German yacht builder Kusch launched the 101-metre superyacht as project V853 in November 2014. The name of the yacht has now been confirmed as she has been christened I Dynasty. She is the successor to the 59.3-metre Benetti superyacht I Dynasty, currently for sale asking €36 million.

This is the second-largest yacht launched by Kusch after the acclaimed 133.2-metre superyacht Al Mirqab, which was named Motor Yacht of the Year in the World Superyacht Awards 2009.

Built in steel, I Dynasty features exterior design and naval architecture from the Monaco-based Vega Yachts and Richard Hein of the A Group. Interiors are by Studio Massari Architecture & Design of Italy, and she makes use of her 16-metre beam offering accommodations for 22 guests as well as three supernumerary staff and 29 crew members.

I Dynasty is currently moored in Wewelsfleth, Germany and is expected to start sea trials. Like Al Mirqab, I Dynasty is also powered by diesel-electric propulsion and is projected to deliver a cruising speed of 14 knots and a range of 6,000 nautical miles at an economical cruise speed.