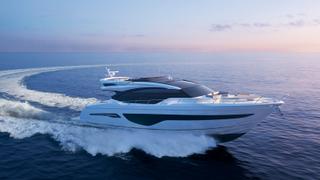 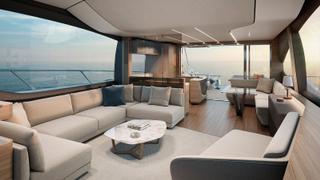 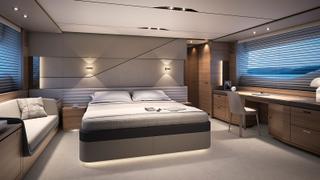 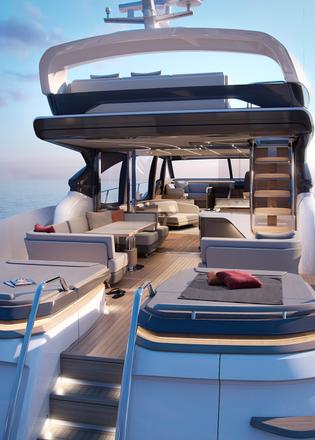 British yard Princess Yachts has revealed the first details of the latest addition to its range of sportsbridge yachts, the Princess S78. The first yacht in the series is due for a public debut in January 2018 at the Boot Dusseldorf boat show.

This 24.66 metre motor yacht follows on from the successful S60, S65 and S72 models, which have been gradually introduced over the past three years. This in-house design combines the benefits of a flybridge with the sporty profile and large sunroof of a sportscruiser.

All of the accommodation is situated below decks with an amidships owner’s suite that stretches across the entire 5.76 metre beam. Two further double cabins and a portside twin cabin take the total guest accommodation to eight people, while the aft crew quarters allows for a staff of two people.

Key features include a highly flexible cockpit, which features sliding seating, creating several options for entertaining. Two large sunpads aft are ideal for those looking to soak up some rays and the transom conceals a 4.45 metre tender garage.

Take a closer look at the Princess S78

Further al fresco relaxation is offered on the split foredeck seating area — an ideal spot for watching the sun go down with a cocktail in hand — and the flybridge, which features an L-shaped seating area and a barbecue, situated just behind the upper helm position.

Power comes from a pair of 1,900hp MAN V12 engines that promise an exhilarating top speed of 39 knots. Other superyacht projects under development at the yard include the flagship Princess 40M series, which has recently spawned a seventh hull called Mirage IV.