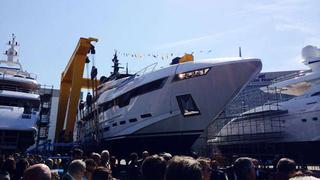 Polaris is the second yacht in Rossinavi's Prince Shark superyacht series, and she arrives just one year after its sistership superyacht Param Jamuna IV launched in March 2013.

The 49 metre all-aluminium semi-displacement hull yacht is powered by twin MTU 12V 4000 M93L engines, propelling Polaris to a high performance of 23 knots while she cruises at 19 knots and has a range of approximately 3,800 nautical miles at a conservative cruising speed of nine to 10 knots.

Exterior and interior design of the tri-deck megayacht is by Enrico Gobbi of Team For Design, who also recently exclusively revealed a new Prince Shark Alusteel superyacht design he penned for Rossinavi. Arrabito Naval Architects is responsible for Polaris' naval architecture.

Rossinavi received an order for the third Prince Shark series superyacht this summer; the new yacht will also feature naval architecture by Arrabito Naval Architects and exterior and interior design by Enrico Gobbi of Team For Design with modern and aggressive lines. She will accommodate 10 guests in five cabins including a full-beam master on the main deck and four doubles on the lower deck. Delivery is scheduled for 2015.