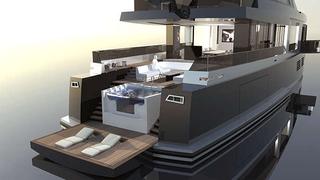 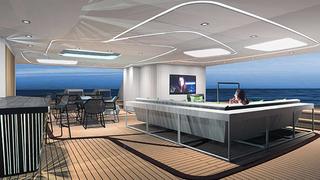 These days it’s hard to find a yacht without some version of a beach club – an area meant to place guests in closer contact with the sea than is possible from a traditional aft, sun or foredeck. An increasing number of owners are requesting features that allow guests to break out of their climate-controlled cocoon.

Who really knows when the first of what we now call a beach club appeared on a yacht, but many draw a straight line back to the day the 102m Lady Moura sailed into Monaco’s Port Hercules for the 1993 ShowBoats International Rendezvous. As soon as she was secured to the quay, her crew deployed a shell door on her starboard side, set out chairs and umbrellas and revealed to the world a full-beam cabana dedicated to near-sea level recreation. Onlookers paid more attention to the yacht’s beach club than to the topless sunbathers on the seawall.

Yachting holidays once were promoted over shore-side resorts with the proposition that if you didn’t like the beach, you could always weigh anchor and move to the next one. Direct access to the water, however, was down a staircase in the transom to a swim platform or via a swan dive from the bulwarks 20 feet above. Sunning and lounging in swim attire was done high above the sea. If the yacht was large enough, a pool or spa tub was the best way to get wet. Lady Moura’s cabana – which reportedly carried a stockpile of real sand – reset the bar.

Today, designers and naval architects are creating even more innovative ways to merge indoor and outdoor environments on board that go beyond a converted lazarette.

Series yachts often trail the custom world in innovation, but in the case of beach clubs, semi-custom builders are fully on board with the concept. Heesen Yachts has begun construction on the first hull of its new 6500 fast-displacement aluminium motor yacht, which has what the company calls a ‘duplex beach club’.

With Omega Architects designing the structure and Bannenberg & Rowell creating the interior, the beach club occupies 25 per cent of the main and lower decks and, when in full bloom, opens up a substantial portion of the yacht for outdoor recreational activities.

The lower deck is equipped with a 22 square metre transom swim platform, a 9.9 square metre drop-down side platform, a health spa with sauna, hammam and shower, and a lounge with a bar and outdoor cinema. The main deck portion has large sofas positioned around tables, a terrace with glass overheads and a glass-bottom swimming pool that sheds natural light on the lower deck lounge.

With larger yachts come larger spaces in which designers can play. For a 57.9m design for CRN, Studio Zuccon International Project of Rome married the spaces of a beach club and a floodable tender bay to create a luxurious boathouse effect.