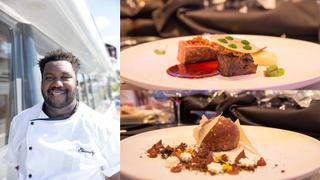 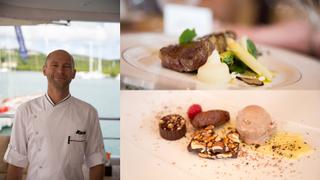 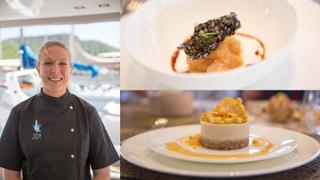 Cooking for a New Year’s Eve dinner party is stressful enough, but producing it on board, in 30 minutes, to a preference sheet of strict dietary requirements highlights the stress charter superyacht chefs face. Twenty-seven chefs, across three categories, were bold enough to take on the challenge at this year’s Culinary Contest at the Antigua Charter Yacht Show (4-9 December, 2019).

The largest yachts in the competition were presented with a request for a multigenerational charter, for a UK family, balancing a preference for healthy cuisine with canapés and a decadent chocolate pudding. The 64.92 metre motor yacht Eternity celebrated a double victory – taking both the Chef’s prize and the Tablescaping award. Chef Peter Frost impressed judges with a selection of canapés ¬ including oyster lovage with Yuzu crème fraiche and salmon egg caviar – and an American Black Angus beef fillet main course, served with beef cheek and pate bric. He ended the meal with a Ferrero Rocher dessert, which was inspired by the festive season in his native London. “I wanted to give a little bit of myself to the meal,” he said. “Most UK homes have Ferrero Rocher over Christmas and New Year so I wanted to bring a tongue in cheek take on that the to the table.”

In the middle size category – yachts 126–159ft (38.4 metre to 48.7 metre) – 10 yachts followed the brief of a 1920’s inspired dinner party including a coeliac, with 44.5 metre Harle’s Sebastian Springer taking the honours. He started with an amuse bouche of seared scallops, with kimchi, followed by a tuna ceviche starter. His main course was based around a K2 Beef Fillet, which was served with a peppered glaze and truffle. The German and South-African chef, who has been in the superyacht industry for nearly a decade, concluded with a multiple element Chocolate Decadence pudding. “I was trying to beat the clock the whole time,” he said. “I had a pre-set starter and dessert, that just needed final touches so I got to concentrate on the K2 fillet that was kind of the main presentation.”

The smallest yacht category had arguably the most demanding brief with a traditional Austrian family evening requested. Chef Desree Pierce, on board the recently delivered 23.47 metre catamaran Joy, won with her creative twist on the requests. She started with a miso cured ceviche and followed with sous vide red wine Ibérico Pork Pluma. Before concluding with a vegan piña colada cheesecake. “I looked at the preference sheet and tried to read into the basics of what they wanted. They wanted flavour, they want something that they are familiar with but they are in an exotic area. So, I tried to pick out elements but give them something exciting,” said Pierce.