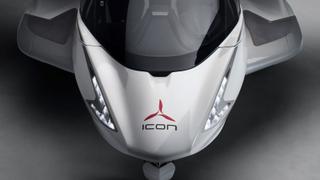 Spread your wings: Test flying the Icon A5 seaplane

The thrill of flying is more accessible than ever before, and with the Icon A5 light sport seaplane you can keep your amphibious toy on deck. Cécile Gauert takes to the skies – and finds it’s all plane sailing...

I have no fear of flying. Jumbo planes? Relaxing. Helicopters? Fun. But the lightweight all-carbon two-seater ICON A5 seaplane is a different animal.

It helps that the first time I step on board, the skipper is the company’s CEO. A former F-16 Air Force pilot, Stanford graduate and aerospace engineer, Kirk Hawkins knows everything about this plane. Its hull, with strakes similar in appearance to that of a planing boat, is also reassuringly familiar.

My short flight some 100 metres above familiar South Florida landmarks is exhilarating. I recognise yachts as we fly over shipyards in Dania, and the park near Hollywood Beach, and I can’t snap enough pictures. Following a gradual descent, we skim the light chop on the Intracoastal Waterway and come to a full stop. “You guys OK?” shouts an approaching boater from his centre console. I am more than OK.

Hawkins encourages me to get out and sit on top of the seaplane. I swing my legs as the A5 bobs gently on the light surf, and bask in the sun. The centre console catches up and I see its passengers looking at us. I give them the thumbs up as they pass. “You guys scared us!” shouts the captain. His laughter drifts over the water before getting lost among the mangroves.

The A5 has been in the press since the 2008 launch of the prototype but remains a bit of a novelty. Test flights of a newly delivered A5 created a bit of a ruckus in New England when people thought they’d just witnessed an accident. What they saw was a plane without floats descend at a good clip towards water and disappear behind the tree line. I can’t blame them for being confused.

The A5, though, should become an increasingly familiar sight. Icon has produced 27 to date at its California facility but intends to ramp up production significantly in the coming years to meet demand.

For those who dream of flying, it’s easier than ever: the rules have become simpler with the implementation of a light sport aircraft licence, the technology is more user friendly and the price of entry is not that high (especially if you share an aircraft). The Icon A5 costs about the same as a big superyacht tender, but how many of those can also fly?

A versatile craft such as this is proving exciting in yachting circles: yacht designer Bill Prince was so inspired he developed a 40 metre explorer yacht concept around it; naval architect Donald Blount says the A5 is a “natural yachting companion for a motor yacht; a flying tender much less complicated than a helicopter”. With its foldable wings and low weight, the A5 stows in a space no bigger than a car parking spot and can be trailered.

The first A5 delivered to a yacht owner forms part of the Allen Exploration fleet. It is rigged with a lightweight sling system to crane it from the boat deck to the water.

Icon has two flight centres, one at its headquarters in Vacaville, California, and the other in Tampa, Florida, where I go for my second A5 experience, an abbreviated introductory pilot course. My emotion meter wavers between excitement and dread. I have flown on small planes but never before piloted one, and a tragic accident involving an A5, which happened just days before, is on my mind. But pretty soon, I am engrossed in a conversation with Warren Curry, director of the Icon Tampa flight centre. An ex-military guy, with lots of flying hours under his belt, he talks really fast and I have to focus, which takes care of any fretting.

Icon conceived the A5 to be accessible to a wide range of people. The instrumentation is straightforward. “Something that is interesting in this aircraft is this gauge right here,” Curry says, pointing to a small screen pictured in the training manual. “It is what we call an AOA, an angle of attack. It’s used a lot in military aircraft and is something that Icon has really employed very well,” he says. “What that is measuring is simply the health of the wing.” So far, so good.

“A lot of aircraft will use air speed as an approximation of the health of the wing,” he continues. “At 60 knots, you’re healthy, at 50 knots you’re ‘meh’ and at 45 knots you’re on stall. Air speed is reliable, but air speed isn’t the whole story. What is the altitude, the weight of the aircraft, what kind of turn and angle bank, how many G forces do they put into the plane? There is a whole lot that goes into the health of the wing. This gauge takes all of it into account.” He adds that, in spite of his vast flying experience, he’s come to rely on this gauge and that’s good enough for me.

With that we walk out to the plane, take a spin around it and finally climb on board. This time I sit in the port side seat and take a closer look at the set-up in front of me.

“So that’s the stick, you know, up, down, pretty basic,” Curry says, adding he’ll take care of the trim to relieve pressure on the stick if need be. He’ll also handle the flaps for landing. He shows me how to release the parking brake (easy peasy) and we’re off. Typically, Curry says, he flies the plane with the Rotax engine at 4,500rpm.

Before we head to the runway, he points out the release mechanism of an emergency parachute available on this model in case of a catastrophic failure. “It brings the plane down 1,200ft [365 metres] a minute, you’ll definitely survive it, but you will know you hit the ground.” He says this with the matter-of-fact approach of a 22-year marine.

Earlier, Curry told me that he jokes with his students that the cockpit is a terrible classroom environment. It’s true. So much happens all at once, it’s hard to digest it all on the first flight. I take off into the wind, feeling a rush as the wings do their thing. I land in the water, one eye on the dotted white line of the AOA gauge, and think I did so well. The illusion does not last. “You dipped the wing,” Curry says, pointing to the drips falling off the tip.

Curry says that flying is very intuitive, and I agree, especially with this aircraft, which is so responsive you can move the stick with a couple of fingers most of the time. I remember little of the lessons of that introductory flight and I am a very long way from flying the plane alone. But I haven’t forgotten the thrill of conquering gravity.

As we taxi and do plough turns, the plane responds a bit like a boat and it feels familiar. At idle we step out, and I climb once more on top of the plane. The towers of downtown Tampa glimmer in the distance like some sort of Oz and it feels a bit like a dream. Only this is real.

Future flight: How private aviation is entering a new era