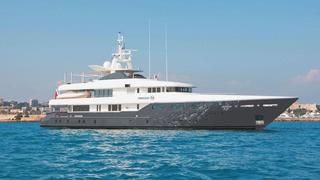 The 47.55 metre motor yacht Princess Too, listed for sale by Cornelius Gerling at Edmiston & Company, has had a €1,200,000 price reduction.

Built in steel and aluminium by Feadship's Royal Van Lent yard she was delivered in 1999. In 2010 she underwent a complete interior refurbishment which refreshed the whole yacht. This included a total refit of the galley and laundry areas including new appliances, plus two new seven metre Castoldi tenders.

In 2014 she entered the Dutch yard Icon for a further refit and returned sporting a brand new Awlgrip paint job. She went in with a blue hull and re-emerged with a two-tone colour scheme that is designed to enhance her beautiful, classic lines with a dark grey hull and a white superstructure.

In 2016 and spring 2017 the current owners invested a considerable amount to put Princess Too into class. Her interior was comprehensively refurbished, a new audio/video entertainment system installed and major technical areas were overhauled and serviced.

Accommodation on this yacht for sale is for 12 guests in six cabins consisting of a full-beam main deck master suite, VIP suite and four twin cabins, all with entertainment centres, television screens and en-suite bathrooms. There is an incredible light and airy feel throughout the yacht, especially in the full-width owner's suite and both the saloons, thanks to the extra large windows.

She has impressive speeds and range too, with twin 905hp Caterpillar engines giving her a cruising speed of 14 knots and a range of 4,500 nautical miles at 11 knots. She is also fitted with Quantum zero speed stabilisers.