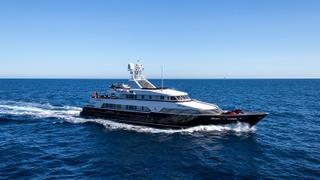 The 45.2 metre motor yacht Tugatsu, listed for sale by Y.CO, has had a currency change from dollars to euros, meaning a price reduction of €1,300,000.

Designed by De Voogt, Tugatsu was built in steel and aluminium by Dutch yard Feadship to Lloyds class and delivered in 1989 with nearly annual upgrades since 2009, most recently in 2018. A luxurious interior by Jon Bannenberg accommodates 12 guests in six cabins laid out as a full beam master suite, two VIP suites, two twins and a single with a Pullman berth. All guest cabins have entertainment centres, Samsung LCD television screens and en suite bathroom facilities while a further six cabins sleep 11 crewmembers aboard this yacht for sale.

The main deck saloon is comfortably furnished and features a formal dining area plus a state of the art entertainment centre with a 65-inch Samsung LED television screen and a Denon stereo sound system. The upper deck is the ideal area for entertaining, with a large aft space providing DJ mixing decks in order for guests to dance the night away while inside the skylounge is a bar, casual dining areas and an entertainment centre including a 55-inch Samsung LED television screen.

Head over to the Virtual Boat Show now for the latest yacht news: