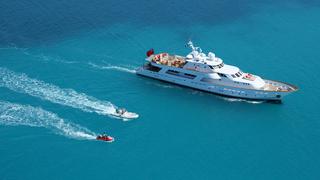 The 38.37 metre motor yacht Parvati, listed for sale by Gaston Lees-Buckley at Camper & Nicholsons, has been sold with Steve Ashford at CSO Yachts introducing the buyer.

Built in steel and aluminium by Italian yard CRN, she was delivered in 1979 as Santa Cruz Tres with many upgrades since. In 1999 the hull was stripped to bare metal inside and out and she was completely rebuilt at the La Ciotat yard in France under the direction of designer Michael Kirschstein.

The interior was also re-designed and fitted with a new American cherry wood interior throughout. The colour scheme of the soft furnishings and fabrics is predominantly cream and the bathrooms are fitted with stone tops and polished nickel fittings. She had a further major refit in 2013-2014 which saw the engines and generators rebuilt and a new bow thruster system installed.

Accommodation is for up to 11 guests in five cabins consisting of a master suite on the main deck, a double and a twin with a Pullman berth aft below deck while amidships is a VIP cabin and a double that can easily be combined to create a very large VIP suite. All cabins have full en suite facilities.

Extra features include a media room with cinema and television and great deck areas for relaxation, culminating in an extensive top deck complete with sun beds, a bar and a barbecue area, perfect for al fresco entertaining and dining. Twin 825hp Caterpillar engines give her a range of 2,750 nautical miles at her cruising speed of 12.5 knots.