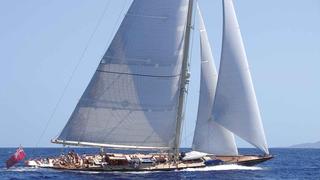 The 36.6 metre classic sailing yacht Shamrock V, listed for sale by Mike Horsley at Edmiston & Company, has been sold in an in-house deal.

Built in teak on galvanized steel frames by UK yard Camper & Nicholsons, she was delivered in 1929 to British tea magnate Sir Thomas Lipton as the first J Class yacht for his fifth and last America’s Cup bid. Shamrock V was the first British yacht to be built to the new J Class Rule and remains the only wooden J Class yacht in the world.

After World War II an Italian owner installed her elegant birds-eye maple interior and she offers accommodation for eight guests in two double and two twin cabins along with quarters for nine crew in two cabins. Twin 205hp Caterpillar engines give her a cruising speed of 10 knots, a range of 1,300 nautical miles at 9 knots and she remains a legendary superyacht on the world’s regatta circuits.

She was rebuilt at the Pendennis yard in 1999 and has since had several refits, most notably in 2014 when she received a new sail wardrobe from North Sails and all standing rigging was replaced. Running rigging is supplied by Gottifredi Marffioli and all deck equipment is by Lewmar.

Fully crewed and in ABS class, Shamrock V was lying in her home port of Cannes, asking €6 million.