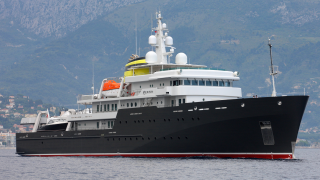 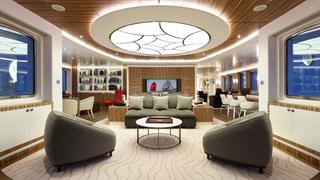 The mighty 76.6 metre motor yacht Yersin has been listed for sale by David Legrand and Antoine Larricq at Fraser in Monaco.

Built in steel and aluminium by French commercial yard Piriou to a design by Pierre-Jacques Kubis, she was delivered in 2015 as an eco-friendly, world-girdling expedition yacht.

Her history is an interesting one. The owner’s requirements for Yersin were so specific that he designed her largely himself, in collaboration with designer Pierre Kubis, and of course the yard. The technology on this boat is her greatest luxury. The starkest example of this is the owner’s willingness to sacrifice guest spaces for technical spaces – the engine room is so sprawling, each piece of equipment given so much space (for accessibility), that it could be mistaken for a modern art gallery.

Yersin’s diesel electric propulsion spreads power production over six generators that can be brought online, one by one, according to demand. They burn only the fuel they need so they’re green and offer serious range.

Two azipods to stern are complemented by a pump jet forward that allows an extraordinary degree of manoeuvrability: coming into her side-on berth at Concarneau, her turn and glide to starboard are eerily smooth.

This tech is green as well as lean: at 11 knots, Yersin consumes 360 litres of diesel an hour, half what she would with standard engines, and at 9 knots this drops to 180 litres an hour. The catalytic exhaust filters 99.8 per cent of harmful particles, while a thorough black and grey water system ends with a UV filter that “zaps” any last bacteria. Powered by a diesel-electric propulsion system, six generators produce power for twin 1,500kW pod engines, allowing an outstanding range of 15,000 nautical miles at her cruising speed of 11 knots.