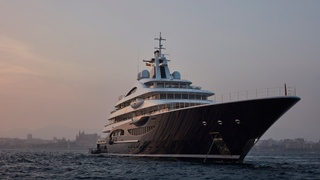 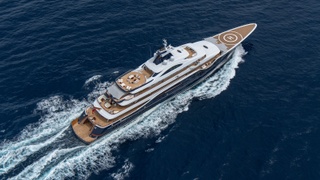 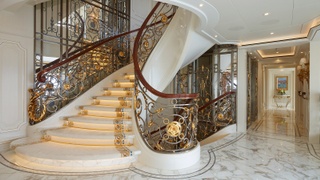 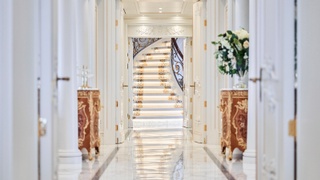 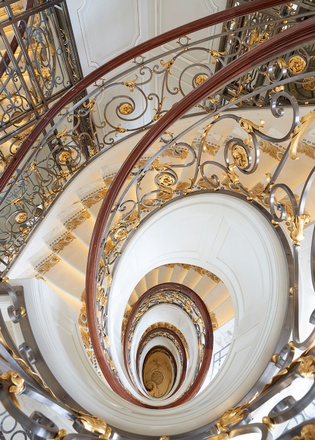 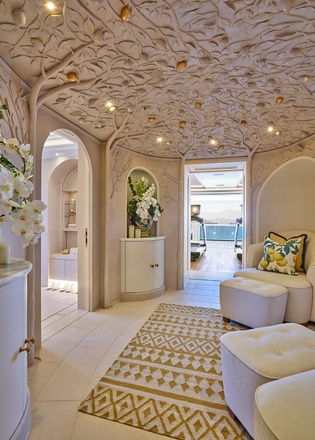 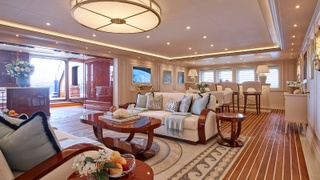 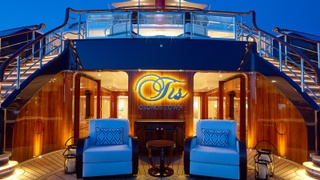 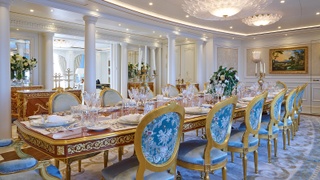 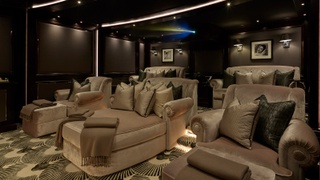 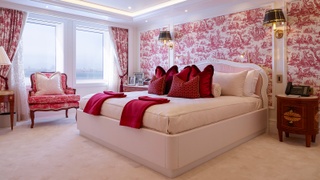 Tis: On Board the 111-Metre Lürssen Superyacht

For her owners, Lürssen’s 111-metre Tis is the best of all possible worlds, as Marilyn Mower discovers.

Explorers don’t have to be blocky; ice-class doesn’t have to mean ugly. Just ask Andrew Winch. “She’s a full ice-class explorer ship, but dressed as a Côte d’ Azur yacht. She is the perfect world cruising package,” the designer enthuses. “She has two certified helicopter decks, helicopter refuelling, two safety RIBs, a guest RIB, an open limo tender and a closed limo tender. But she is ice-class!”

According to Fort Lauderdale-based yacht broker Rob Moran, Tis is built for owners who travel frequently between many of the world’s great cities, slowing down occasionally to spend time at their country estate. It seems impossible that the 111 metre could be their first yacht. However, according to Moran – who negotiated the deal – it wasn’t until they had experienced cruising on other yachts that they felt ready to decide on their ideal platform for life aboard.

“I met them in Monaco in 2005 when they came to charter Phoenix and they became some of our best clients, chartering six to eight weeks a year,” says Moran. “They chartered Kismet on a regular basis for three or four years and also Northern Star. In 2008, we had a meeting with them on Kismet and they began talking about building their own boat.” His team started developing preliminary specifications.

“Sometime after that, while he was chartering Northern Star in the Balearics, he called and asked me to get ‘the Lürssen guys’ down for a meeting,” recalls Moran. “They came and he signed a letter of intent for a 95 metre. Then we got busy designing in earnest on a hull platform with which we were familiar.” The project grew, however, and before long it was coming in at 100 metres – big but still possible with the current hull envelope. “But then he and his wife asked for more things for their yacht. Suddenly we were looking at 111 metres, which would require a [wider] beam and new mechanicals. It was a whole different boat.” In fact, Tis is completely custom from the keel up.

It’s easy to imagine Scarlett O'Hara sweeping imperiously down the spectacular staircase from the sitting area on the owners' deck to the lower part of the two-storey saloon on the main deck.

As the initial design work on the 95-metre plan progressed, Moran introduced his clients to five design firms and showed them three other similar-sized yachts for which Moran’s firm had managed construction: Phoenix 2, Ace and Solandge. “They selected Winch Design and we had signed the contract in Florence,” says Moran. “Now we had to go back and say: ‘Hold on, there’s a new boat with 50 per cent more gross tonnage.’ The main driver for the growth in interior space was their request for a spectacular entrance on a spectacular staircase – a Gone with the Wind experience – and huge entertaining spaces.” Interestingly, although the length of the hull grew, the upper superstructure did not and this, notes Winch, created an even more elegant profile. “They wanted a classic-looking boat, not one that was trying to look as if it was going fast.”

As I explore the high-volume yacht during the flurry of activity at her final fitting out, lead designer Julia Dean explains that the design theme is inspired by all of the owners’ favourite places, including Provence, Tuscany, New York, London, Morocco, South East Asia and a Russian dacha. These disparate influences are carefully modulated and colours lightened to flow amid an overall backdrop of classical Parisian elegance; indeed some of the spaces rival Versailles for elegance, with Louis XIV to XVIII-inspired furniture on the main deck and carpet patterns mimicking those of Parisian salons from the era. The Austrian company List General Contractor was responsible for implementing the design

With a platform measuring 111 metres by more than 18 metres, and owner and guest spaces spread over five decks, there is substantial space to create rooms of differing use, a feature driven by the couple’s desire to live aboard for months at a time. The yacht is set up to cater to a formal lifestyle and has a network of stairs, passages and lifts fore and aft on the port side so that crew can tend to the machine and guests simultaneously and nearly invisibly.

From the first time this project was glimpsed under construction in dry dock, its interior only roughly divided, the most astonishing element was clearly visible: the two-storey main saloon with a double staircase sweeping up to an informal sitting area on the owners’ deck. The Large Passenger Yacht Code has strict rules when it comes to fire prevention. It is not easy to adhere to these regulations with the design of an open two-storey space. The upper and lower spaces must be considered a single zone that can be separated from the rest of the vessel by fire doors, and there are restrictions on the amount of flammable material that can be used for walls, floors and ceilings. The designers’ job, of course, is to ensure that owners and guests see none of this.

The guest suites are spread over two decks, with four, including two very large ones, on the lower deck, positioned to suffer the least motion. Should conditions at sea become difficult, the starboard VIP, named the Dacha suite, is designed to be a sea cabin for the owners. Four more guest suites are on the main deck, forward of the centre of circulation. The designers’ skill at manipulating detail is impressive; every suite has the same basic bed, chairs, tables, lamps, ottomans, desks or dressing tables and sconces, yet they are different in each one, carefully selected to evoke their namesake city theme.

The owners’ suite is suitably grand, and with three-metre overhead heights. It comprises six rooms – seven if you count the owners’ galley – including a private massage/hair salon. Two fixed balconies and a large covered forward terrace radiate off the cabin, while aft is an informal sitting room overlooking the saloon below, and further aft a 16-metre by nine-metre al fresco dining space. Sliding-glass panels can turn it into a climate-controlled winter garden. There is a formal office located on the main deck opposite a formal dining saloon. Positioning his office here gives it imposing status but also preserves the owners’ deck above simply for relaxation.

Staircases are a Winch Design signature and the one aboard Tis could be the firm’s magnum opus. For starters, there is the staggering size and elegance of the main deck lobby, all gleaming stone, columns and enormous windows at the base of a four-deck atrium soaring 15 metres. The balustrades and handrails are gilded wrought iron, trailing leaves and flowers: Monaco’s Hôtel de Paris pales in comparison.

The adjacent lift may be a hydraulic wonder that rises and falls silently through all the decks at the touch of a button, but Winch Design has given it the illusion of a 19th-century Parisian lift, complete with a seat and gold leaf on the ceiling. “It’s not a tube, it’s a jewellery box,” says Winch. Its glass walls and door face balconies at each landing, giving both the lift and the atrium a stunning sense of space. The metalwork by a German blacksmith is nonpareil. Without doubt, certain elements are designed to impress, but the intimate space of the relaxation lobby in the spa and the cosy cinema on the lower deck add a playfulness that some yachts of this size can lack.

A perfect example of an intimate space is the tea room perched on the uppermost deck, facing forward. The walls and window mullions are a near-pastel green, the dragged brush technique keeping surfaces from screaming “new”, and panels hand-painted by DKT Artworks add a decorative flourish. Low windows, sofa seating and sliding doors to small outside seating groups conjure up afternoons of quiet conversation over strawberries, finger sandwiches and cakes, the afternoon sun glinting off an enamelled samovar. If anyone is missing from the party, hunt for them here, where the views go on forever. They may also be relaxing under the hand-painted, bas-relief lemon grove on the softly-lit domed ceiling of the relaxation room centring the bridge deck spa.

There is a mural of Tis at anchor and antiqued mirrors are framed like windows. The spa also features a beauty salon, hammam and massage room, and an expansive gym overlooking the swimming pool and attached glass-bottom spa pool with views of the sea. Swarovski crystals backed by tiny lights and embedded in the pool tiles shimmer day and night.

The beach club, meanwhile, functions as the yacht’s water-level reception area and chill-out space. With mahogany panelling, sofas, a dining or games table and a full bar, it seems far too refined to be called a man cave, but there are large screens for watching sports, a traditional banya, and a sauna, so then again, perhaps it is. Sun loungers on the wide stern platform or the fold-down terrace off the sauna encourage relaxing in nature and give guests two platforms for diving into the sea.

“The beach club is large and impressive. They wanted to create a sense of welcome for guests, as it is often the yacht’s front door,” says Winch. “We spent a great deal of time discussing it. Sometimes he will have business associates on board and this will be their hang-out space.”

Such a complex interior demands a way to keep track of it all, and build captain Rob Maguire, who served 13 years on Northern Star, used the build to perfect a VR-type, 3D photo-based system that documents every wire, duct, power junction, pipe and surface on the yacht. It should make servicing and future refurbishments a breeze. Every detail, down to the size of wire and the dates of work done, is catalogued. Maguire calls his system Black Fish Media.

Moran explains that partway through construction the owners chose to build the yacht to PYC standards so that they could carry more people with them without chartering a second boat, and with that decision came the need for a massive upsizing in freezer, cold and dry storage and water-making capacity. Lürssen’s sales director Michael Breman says that shifting to PYC certification required “more life-saving appliances” and increasing the fire-fighting system.

Mechanically, Tis relies on a standard propulsion system with two main engines and three large gensets. She has a top speed of 18 knots and a 7,000nm range at 12 knots. She also has dynamic positioning. The keel was laid in 2015, so was not required to be Tier III compliant, although she is fitted with a HUG particulate filter exhaust system so could be converted. The owners insisted on a certain speed and low levels of noise and vibration, which was achieved and then some.

Tis is a yacht designed to sail easily around the world, and her globally inspired decor appears as if it has been joyfully collected by a family that loves living on the sea. Wherever they are in the world.