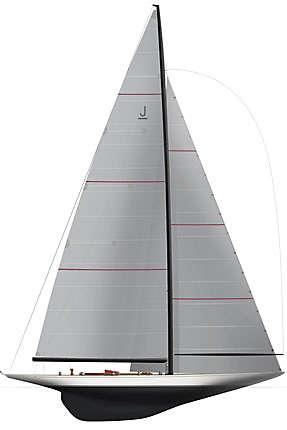 Reviving a collaborative project announced in 2010 that has yet to be built, the replica J Class Yankee is designed the Dutch firm and would be built by Holland Jachtbouw (HJB). The Netherlands-based builder HJB has recently strengthened its partnership with J Class yachts and has the exclusive rights to build two new J Class designs, Yankee and J9, and is now ready to begin construction. As the J Class yachts make triumphant return to America's Cup with their own regatta in June 2017, this is the ideal time for J Class and racing enthusiasts to think about building or buying a J.

The Dykstra design for Yankee is a replica of the original, which participated in a round robin series to win a Defending spot for the America's Cup in 1930. She was a contender to be Defender in 1930, but lost out for not being quite as fine-tuned as her rivals. After modifications to her rig and bow, she proved more competitive and came back for the America's Cup 1934 trials. Sadly, the original J Class Yankee met her demise in 1941 as she was broken up as part of the war effort during World War II.

Designed by Frank Paine, the original Yankee has a nearly straight sheer line and lines that are easy on the eyes. Dykstra's design retains this clean design with a flush deck layout, and performance is optimised as the yacht is designed to the new J Class Association rating system.

“These boats were designed to race, and that is the idea behind the new Yankee,” says designer Jeroen de Vos, who has sailed on seven of the eight Js launched to date. “Our experience of sailing on very different boats has taught us that bigger is not necessarily better. It’s all about waterline length, not length overall. So rather like Rainbow (for sale) or Endeavour (for sale), the new Yankee will be quite small and light and very nimble.”

The Dykstra team has learned through experience the importance of keeping the deck layout as simple and efficient as possible. “We’ve seen that it’s crews that win races,” explains Jeroen de Vos. “If you mess up the start, the race is almost over before it’s begun, so the crew has to be able to handle the sails and deck gear quickly and easily.”