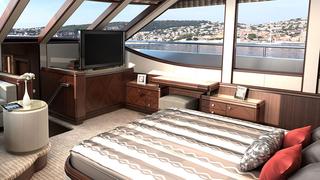 The first Ocean Alexander 112 superyacht has been launched and will make its debut at the Yachts Miami Beach boat show (February 11-15).

Construction began in the summer of 2012 following a long period of planning. The in-house team at Ocean Alexander took great care in completing all of the engineering and tooling for the Ocean Alexander 112 before work started on the build.

Classed by the Royal Institution of Naval Architects (RINA) for chartering and Marshall Island Yacht Code MI-103, the Ocean Alexander 112 has been constructed to a high standard, which includes safety measures usually found on larger vessels.

The owner of the semi-custom yacht was able to choose the style of the interior, also by Evan K Marshall, from three options: modern, contemporary or traditional. The layout is also adaptable depending on the owner’s preferences.

Accommodation for 10 guests is spread over five cabins, including a master suite on the main deck and four guest cabins on the lower deck — two doubles and two twins. All of the cabins feature large portholes to let in natural light. Crew quarters accommodate six crewmembers.

In the standard version, the Ocean Alexander 112 is powered by twin 1,920 horsepower MTU engines that provide a top speed in excess of 24 knots. There is also a more powerful option with twin 2,250 horsepower engines.

In 2013 Ocean Alexander announced plans to expand its yacht building facility in Taiwan, and at the beginning of last year the yard delivered the new Ocean Alexander 100.

The tri-level 112 is the latest model, and the first hull will be joined at the Yachts Miami Beach boat show by the new 21 metre Ocean Alexander 70.