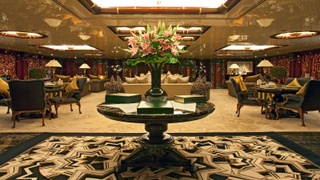 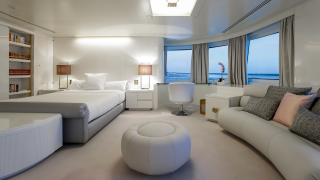 Whatever Lady Moura's been taking, I’d like some. She may be 30 years old this year, a respectable age for a yacht, but the palatial interior of this seven-deck, 105 metre looks as pristine as the day Blohm+Voss launched her to international fanfare in 1990.

With exteriors and interiors by Luigi Sturchio, she was then the ninth largest yacht ever built – and the most expensive. Three decades of ultra-private family use followed, but this year she’s for sale with Camper & Nicholsons and, for the very first time, outsiders have been allowed to venture inside.

Her (original) carpets are still soft, pure cream; flowers tumble from vases on to freshly polished dressers. “One of the things that we’re most proud of, actually,” says relief captain Sebastian Rauber, “is that most of the interior is still original.” One beauty secret here is constant maintenance by an army of crew who know every corner of the boat. “The average time crew have been on board is 18 years: the chief housekeeper has been here for 25 years; the bosun 28 years; the chief engineer came on board the first time in 1993; the captain has been here for 17 years. A lot of people have spent more time on this boat than at home over the last 20 years.”

The second secret of youth is use – or the lack of it. She’s never been chartered; in fact she hasn’t moved much at all. To those familiar with Port Hercules, Lady Moura is as distinctive a feature as the Foster + Partners-designed Yacht Club – and she pre-dates that by 24 years. “Cruising – we didn’t do too much,” says Captain Matthias Bosse. There are 13,500 running hours on the clock – that averages out at around 37.5 a month.

The third factor is the bone structure that Blohm+Voss installed. “Lady Moura was built in one of the most important shipyards in the world,” says Paolo Casani, CEO of Camper & Nicholsons.

“She was built by a passionate owner who participated very much and influenced the shipyard with some solutions. So over five years of construction plus one year for engineering – there were in total six years planning and construction, which means that they had time to take care of every little detail. This is one of the reasons why the boat, after 30 years, is still in very good condition.”

She was also a technical marvel, with some achievements that are, Casani says, “very, very modern – amazing solutions considering that it was built in 1990. Some of the most important shipyards in the world came to visit Lady Moura for ideas, to understand details to replicate.” Blohm+Voss, which is now owned by Lürssen (itself at the cutting edge of yacht design today), includes in that list: tenders that are stored inside, behind hydraulic doors; a huge sunroof that slides open over the indoor pool on the top deck; a lounge amidships on the lower deck that runs the full beam; hydraulic opening sea terraces, and much more.

“Subcontractors at that time were focused on standard and commercial outfitting equipment – not at that high level that today is called ‘yacht standard’,” says Blohm+Voss, adding, “Everything was new, not proven technology as it is now.”

The yard’s own engineers developed Lady Moura’s hydraulic tech – for example, the hidden side gangways – alongside their subcontractors. Strength calculations for a vessel with so many openings and gangways were also a challenge. “The thing to remember about this ship is that everything comes out of holes or folds in/folds out,” says Rauber. “Navigation lights fold out on top, the mast goes up on the foredeck so as not to break the design, the bridge wings slide out. Everything is pop-up, everything moves. That’s why we have a pretty clean design. I think at that time it was very revolutionary to have so many moving parts in the hull and in the structure.” Today’s superyachts may be studded with fold-out balconies and hatches – not so in 1990. This “perforated hull”, as Blohm+Voss describes it, required new calculation methods and highly competent engineering.

The well-maintained two-storey engine room is testament to the enduring value of that competence: the original MTU engines (which Rauber describes as “honest” and offer an impressive 8,000nm range at 17 knots) were overhauled in the past two years. The changes that have been made to the boat since launch have mainly been behind-the-scenes technical upgrades. The bridge, for example, is a very different beast to the one installed in 1990.

There are, however, a few more visible changes, says Rauber. On the vast helideck (“You can land pretty much anything on this deck,” he says) the original blue “concrete cement” sole was replaced with a more modern rubber in a neutral tone. The bright blue hull has been repainted in easier-to- maintain white and the whole boat’s teak decking has been replaced.

So what does Lady Moura feel like today? Well, the blunt answer is really, really big. That is hardly a surprise at 105 metres long, but her 6,539 gross tonnage is the real figure to note.

With exterior rather than interior space increasingly maximised in 21st-century yacht design, you would expect Lady Moura’s volume to be greater than more modern examples – but the distance by which she outsizes them is staggering. Take 107.6-metre Benetti superyacht Zoza, by some way the most voluminous of Benetti’s three 100m-plus launches last year; Lady Moura is two metres shorter but packs on 689GT more. For a historically relevant comparison, take the 103.8-metre Al Mabrukah, launched in 1982, at 4,633GT – that’s a difference of nearly 2,000GT.

Together with Lady Moura’s rich, enveloping decor by Luigi Sturchio, this translates to a feeling of being cocooned in a private world. High-gloss mahogany gleams down corridors that taper so far into the distance it seems impossible that this could be a yacht. There’s space for every conceivable luxury, from a cinema to a concealed hair salon next to the lobby, and an owner’s dressing room so vast there’s space for several glass-encased, rotating tie-racks and a walk-in wardrobe just for shoes. There are cabins for hairdressers, make-up artists, beauticians and any number of private staff, as well as substantial offices for the owner and his wife.

The five huge children’s cabins on the owner’s deck are decorated in a lighter style than the rest of the boat. “All five have this en suite dressing room and an en suite bathroom, and four have Pullman beds as well, if you have nannies or friends,” says Rauber. At the other end of the colour spectrum, the full-beam VIP cabin on the owner’s deck is replete with deep burr wood, smoked mirror, and as Rauber accurately puts it, “is actually bigger than a lot of owner’s cabins on slightly smaller boats”. The master dwarfs all of this. Taking over the entire aft half of its level, it is sequestered into a light main cabin with access to a private terrace, a separate cabin, that vast dressing room and a central lobby with a wall of television screens.

The formal saloon on the main deck is predictably vast, as is the seldom-used 18-plus-seat dining saloon on the same deck. But there are more intimate spaces too, notably the family saloon on the bridge deck, which opens on to an aft deck. But the loveliest social space is the pool on the top deck, forward of the helipad. Glass-clad, with an opening roof, it offers a private set-up, surrounded with casual dining and coffee tables, a spa pool, dance studio and terrace.

But just as essential to the self-contained feeling of this boat is the sophisticated service structure that’s built in. As much of the bridge deck is dedicated to senior crew operations – with a suite of offices and living quarters – as the deck below is dedicated to the owner. The tank deck, meanwhile, is a warren of facilities that make the yacht tick, with sheer numbers necessitating separate galleys and laundries for crew and guests – all amply sized. “In the season normally we used to have something like 65 to 70 crew,” says Rauber. The crew also have a dedicated hospital, complementing the intensive care unit up in the guest area. There’s also a bakery, a workshop, a crew gym – “it’s normally full from six in the morning until midnight” – and, of course, massive stores. Crew cabins, on the lower deck, are decently sized and have en suites.

Connecting the tank deck hub to the rest of the boat are two crew staircases – one aft and one forward – and two crew lifts. Also of logistical value is the unusual set-up on the lower aft deck. Arriving on Lady Moura, moored stern-to, guests are routed straight up a central staircase to the main aft deck and into that impressive main saloon. Behind that staircase, but also accessible from the dock, is a cleverly concealed area for crew operations, allowing them to handle deck equipment, take on provisions, or just take a breath of fresh air, unseen by guests.

Here, at the less glamorous end of Lady Moura, lies the crux of her success. While she has monogrammed bins and a gold-plated nameplate (yes, really) she is, in essence, a well-designed machine, rigorously maintained. After all, that is the true secret of beauty.