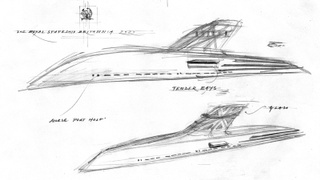 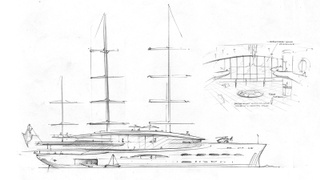 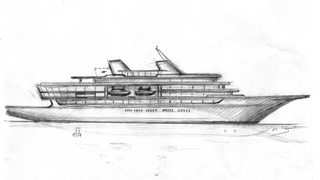 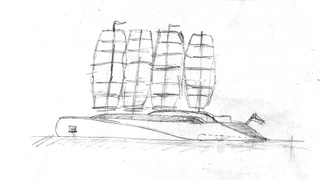 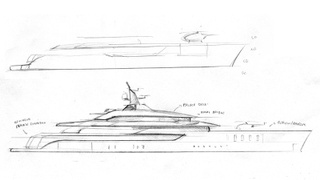 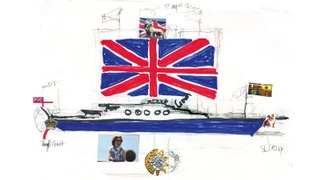 When the Royal Yacht Britannia was decommissioned in 1997 as a cost-cutting measure by the British government, not everyone was ready to say farewell. Built in 1954, HMY Britannia sailed more than one million nautical miles during her 44 years of service and hosted the likes of Sir Winston Churchill, Rajiv Gandhi and Nelson Mandela. Several attempts have been made to commission a new royal yacht with plans drawn up by British design studios Bannenberg & Rowell and Winch Design, but to no avail. For the 2020 Design Challenge, BOAT International put the task to a room of superyachting specialists at the Superyacht Design Festival. The results did not disappoint...

The design: A 140 metre, three-masted sailing yacht with telescopic wing sails that allow the rig to concertina into itself when at anchor or cruising under power. High-profile guests stepping aboard can make use of its two helidecks: one retractable landing pad on the starboard side that doubles as an exhibition space, and another on the bow with a helicopter hangar beneath. Alternatively, there's a hydrogen-powered royal limousine tender named Lillibet (the Queen’s familial nickname)

Star features: At the heart of the yacht sits a grand, double-height ballroom for royal gatherings. Two-storey structural glass windows on either side offer sweeping sea views – the perfect backdrop to any royal occasion.

“Project Albion is a modern, forward-thinking sailing yacht, incorporating green features and technology, whilst maintaining a sense of grandeur and tradition” – Fiona Diamond

The design: A striking 202 metre motor yacht designed to function as a floating embassy. Split into three spaces – public, shared and private – The Stateship Britannia is able to host large-scale, international events but also serves as a private residence for royals on board. There’s a helicopter hangar that converts into an emergency hospital, which in light of recent events won't go amiss, while the portholes are deliberately positioned to read ‘2020’ in morse code, marking the year as the beginning of a new era for the royal family.

“We want a yacht that stands out and cannot be confused with any other multi-million pound boat. It’s something different” – Luiz de Basto

The design: A seven-deck modern-classic with a conservative design that reflects the tradition and values of the royal family. Measuring 140 metres, Royal Red Diamond features a Neptune lounge, two helipads, a duplex royal stateroom and a swimming pool that sits between the two funnels. The motor yacht will be powered by twin Rolls Royce 5,500hp diesel-electric engines.

Star feature: A grand atrium with an imperial staircase sits aft, enclosed by structural glass, and doubles as a gallery and exhibition space.

The design: Royal Lion takes its inspiration from the famous Cutty Sark clipper, a merchant sailing ship that used to bring tea back to Britain from China in the 1800s – with a few upgrades of course. A 180 metre sailing yacht requires some serious sail power, which comes in the form of 24 solar sails housed in four DynaRig masts, allowing the royal yacht to reach 17 to 18 knots.

Star features: A platform that opens from the transom can be used as a touch-and-go helipad for royal visits and also doubles as a party platform for state functions and social occasions.

“Royal Lion can store solar energy through the sails into high capacity batteries, which can be used for the hotel load or for manoeuvrability when coming in to port” – Claudio Zimarino

Britannia As A Rule

The design: This modern eco-yacht is designed to be carbon neutral for a new era of eco-savvy royals. Among its credentials are solar panels, turbine tubes and a nuclear power plant by Rolls Royce. In their downtime, the royal family can make use of the yacht's electric Jet Skis, electric helicopter and there's even an electric Land Rover Defender for trips ashore. Other highlights include a dedicated "palace deck" with a royal stateroom and a helicopter hangar on the foredeck.

Star features: For those boarding the yacht via the aft, sliding glass doors on the transom open to reveal one large indoor-outdoor exhibition space.

The design: With the Union Jack plastered across three DynaRig masts, there’s no confusion as to which family this royal yacht belongs to. Project Winston takes its design cues from three great British symbols: the hull is inspired by an Aston Martin, the upper deck by a crown, and the sails by the Union Jack. Elsewhere, sitting proudly on the bow is a figurehead of a British bulldog, while a bejewelled royal balcony is the perfect spot from which to wave-off the evening's guests.

Star features: The sails feature an integrated LED system that showcases the Union Jack on one side and act as a virtual billboard on the other to promote the best of Britain wherever it goes.

“Greta Thunberg has already agreed to come on board” – Jenny Skoog