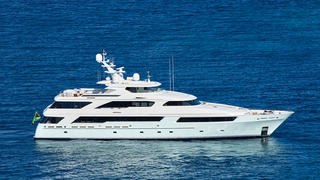 Built in GRP by US yard Delta Marine to ABS class and MCA coded, she was delivered in 2006 with a major interior refit under the supervision of Claudette Bonville in 2014. Accommodation is for up to 14 guests in seven cabins consisting of a master suite comprising the majority of the owner’s deck and featuring a spacious skylounge, two twin VIP suites forward on the main deck, and two twins and two doubles below deck. All cabins have entertainment centres, television screens and en-suite bathroom facilities.

In the main saloon lounge area there is a wet bar to port and a buffet to starboard and there are two nearly identical seating areas to port and starboard with two couches, four ottomans and four armchairs easily seating 14 guests. Forward is an entertainment centre with a large LG television screen on a rise and fall mechanism and a Kaleidescape server offering on demand video and audio throughout this yacht for sale.

Up in the skylounge is a full service bar to port with a fossilised wood top, a games table, settee, two comfortable chairs and an entertainment centre. Moving aft is an enclosed aft deck with full climate control, a bar, table and seating along with access to the sundeck via a glass enclosed spiral staircase.

Special features include an elevator through all decks and a fully equipped gym on the main deck. Twin 1,650hp Caterpillar engines give her a range of 5,000 nautical miles and she is fitted with Quantum zero-speed stabilisers.