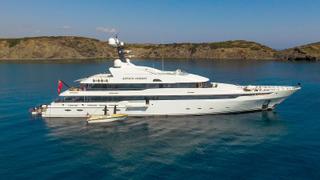 The 58 metre motor yacht Astrid Conroy, listed for sale by Moran Yacht & Ship, has been sold with the buyer introduced by Ocean Independence.

Launched in 2006 by Dutch yard Amels sporting exterior lines by Winch Design, she was built to Lloyd’s Registry standards from a steel hull and aluminium superstructure. Privately used and MCA compliant, she has been maintained to the highest of standards by fastidious owners. Astrid Conroy returned to Amels in 2014 for a major refit, which saw a new Michela Reverberi Design interior replace her original Winch Design décor. Meanwhile a cinema room/disco was added, the superstructure was repainted and the AV/IT systems were upgraded.

Accommodation is for 12 guests split across six staterooms, while her crew quarters allow for a staff of up to 16 people. An on-board elevator provides easy access between all four decks, allowing guests to effortlessly explore her 923GT of interior space. Other standout features include an on-board gymnasium, beauty salon, four-person Jacuzzi and beach club. What’s more, her tender garage is fully stocked with an 8.1 metre Windy SR26, six metre Ribeye RIB, a 4.2 metre rescue boat and a pair of Sea Doos.

Power comes from a pair of 2,373hp Caterpillar 3516 diesel engines, which allow for comfortable cruising at 15 knots, topping out at 17 knots. When trimmed back to her cruising speed of 11.8 knots, Astrid Conroy boasts a transatlantic range of 4,800 nautical miles, drawing on a total fuel capacity of 120,000 litres.