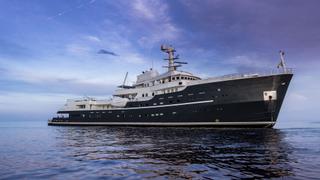 The 77.4 metre explorer motor yacht Legend has been sold with the buyer represented by Y.CO.

Legend started life in 1974 as an icebreaking tug from Dutch yard IHC Verschure. She was sold to a private owner and converted into a yacht - Giant - from 1999-2003, then laid up in 2005. In 2016 she was delivered by Icon Yachts after an extensive refit and conversion project. The fully classified Class 1 icebreaking ship was designed to become a charter yacht that could carry 26 guests without compromising on safety and strength.

Her new 2,407GT interior, by Thom Beerens and Jan Verkerk, boasts both a large dining table and a smaller dining area inside on her main deck. Legend also has a fitness room, movie theatre and a medical suite on the main deck. Above, there are several spaces to relax or entertain, complete with a grand piano and other instruments.

The owner’s deck has a helicopter pad on the aft deck, with the owner’s suite inside which boasts a king size bed, a settee, a bar and luxurious his and hers en-suites. The other guest cabins are split between the main and boat decks.

Outside, a large dining table sits on the aft deck, with a lounging and sunbathing area, a bar and a barbecue area on the boat deck. Cranes were also added for launching all manner of water toys. Her top speed is 17.5 knots and she boasts a maximum cruising range of 7,640 nautical miles at 14.5 knots with power coming from two 3,400hp Smit Bolnes 308HDK diesel engines.

The asking price of Legend has been withheld.