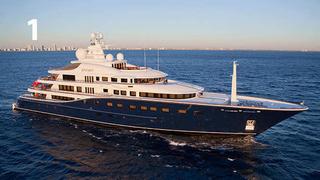 Throughout each year we track superyacht name changes, bringing you a full list in our Market Intelligence section of the website. All year long, you’re welcome to contact Raphaël Montigneaux, our Database Content Manager, to report any name changes or specification modifications on a yacht following a sale or a refit.

Here are our top 10 superyacht name changes of 2014

This impressive former icebreaker was built by the Dutch shipyard IHC in 1974, and was converted into a yacht in 2002. Some years ago, Giant I was partially damaged by a fire, and stood without activity until her recent sale. A few months later, she was spotted in the Netherlands under her new name Legend. She's now at the Icon shipyard where she will be entirely refitted, including a stern extension. Her new LOA will be 77.1 metres.

The atypical 73.61m explorer superyacht Pegaso was launched by the Spanish shipyard Freire in 2011. Following her recent sale, Pegaso was refitted at Freire again and renamed Naia.

Tu Moana was built by the Australian shipyard Austal in 2003. With her sister ship Tia Moana, she was part of a fleet of mini luxury cruise ships in French polynesia. Tu Moana is currently under conversion into a yacht in Greece. Her new LOA should reach 72 metres and her new name will be Serenity.

The famous 70 metre superyacht Reverie was launched by Benetti in 2000. She remains one of the largest units built by this Italian shipyard. Following her sale, Reverie was refitted in Fort Lauderdale and renamed Freedom.

White Cloud was launched by Feadship in 1983 under the name New Horizon L. She was one of the most famous superyachts thanks to her design by Jon Bannenberg and her colourful owner, the Prince of Lignac. In 2005, she was sold and extensively refitted, lengthened, redesigned and renamed White Cloud.Following her recent sale, she's renamed again Falcon Lair.

The sale of the 66m Aglaia is nearly the 400th one in 2014, but nothing is known about it. The small amount we do know is that she's the largest sailing superyacht designed by Dubois NA and has been renamed Ahimsa. She was delivered by the Dutch shipyard Vitters in 2011.

Here is another unit built by the famous Dutch shipyard Feadship in this list of the top 10 name changes in 2014. The 65m superyacht Pestifer was delivered in 2010. She is designed by De Voogt Naval Architects with exterior styling by Clifford Denn, and an interior design by François Zuretti. Following her sale in August, she is renamed Tanusha and becomes the successor of a Benetti Classic motor yacht.

Felicità West was one of the largest sailing superyachts sold in 2014. Delivered by the Italian shipyard Perini Navi in 2003, the 64m Felicità West was designed by Ron Holland and Nuvolari Lenard. Her sale was reported after the latest FLIBS, when she was renamed Spirit of the C's.

See the 10 largest superyachts launched in 2014

See the 10 most expensive superyachts sold in 2014