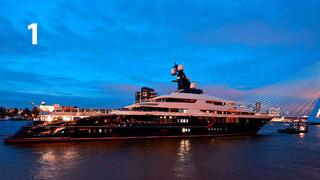 Our round-up of the 10 biggest superyacht stories of 2014 includes the biggest launches, deliveries and photography of some unusual superyachts.

In June we reported that Oceanco had delivered Equanimity, and it became the most popular news story on the Boat International website. Perhaps it's because Equanimity was the first superyacht built to the Passenger Yacht Code, or the fact that she's a collaboration between Oceanco and Andrew Winch, that this story held the interest of our international audience for so long.

2. Polar Bear shot by police and destroyed by fire

Proving that all you need is an exciting headline, this story was about 31m explorer yacht Polar Bear that was destroyed by fire while dry-docked in San Diego. The shooting by the police was actually – according to eye witnesses – done to break the windows so the water could put out the fire more effectively. This was the second most popular superyacht news story of 2014.

The third most popular superyacht news story from 2014 was news of Project Green's launch. The first of Lürssen's projects launched that year, Ester III hit the water in May in Germany.

One of the most popular news stories of 2014 was news that Comanche had been photographed under sail. We interviewed Skipper Ken Read on her speed-demon abilities and record-breaking goals to bring you the inside story on the ambitions for Comanche.

Comanche will be racing in the Rolex Sydney Hobart.

When we reported that Fincantieri had launched 140m superyacht Victory, we knew it would be the biggest addition to the Register of the 200 largest superyachts in the world. The photo shows a rare glimpse at this very private luxury yacht.

The somewhat unusual luxury yacht Black Legend proved one of our most popular news stories of 2014, perhaps because of the images of her very customised interior. Black Legend has a bold pirate theme throughout the boat, demonstrating the skill of Sunseeker's in-house bespoke interiors devision. You can see more photos if you click on the headline.

We published photos of SuperSport emerging from her shed and they proved very popular on the website. The 49m yacht is certainly innovative, with an intimidating-looking, wave-piercing monohull design.

After four years of intensive work, classic 65m superyacht Shemara was finally returned the water. Previous Editor Tim Thomas was at the launch to bring you an in-depth account and update on this fascinating project.

46.22m Como was built for experienced yachtsman Neville Crichton – the only motor yacht to join his fleet of competitive sailing yachts – and was launched in January 2014. Find out more about Como with our exclusive first look on board.

See the 10 largest superyachts launched in 2014