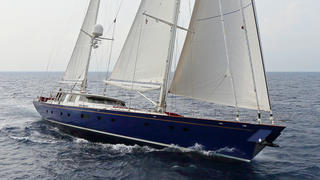 The 38.89 metre sailing yacht Cyrano De Bergerac, jointly listed for sale by Fraser and Northrop & Johnson, has had a price reduction of €700,000.

Built in aluminium by Camper & Nicholsons to a design by Rob Humphries, she was delivered in 1993 and last refitted in 2012. Interestingly, this yacht for sale was commissioned by Ermanno Bassani, father of Wally Yachts founder Luca Bassani.

A classic interior in blonde teak by John Munford accommodates up to ten guests in three cabins consisting of a master suite and two twins plus two Pullman berths, all with entertainment centres, television screens and en-suite shower facilities. In addition, the port area of the lower saloon can be divided off by a teak partition to provide an en-suite twin cabin.

The deckhouse on Cyrano De Bergerac is the focal point of social activity. The teak-floored aft area is a shaded open cockpit, featuring electro-hydraulically operated side windows that can be fully retracted and two large tables that can be joined to create one 20-seater table. The deck saloon includes the inside helm station that is completely concealed when not in use. A few steps lead down to the full-width main saloon, with a formal dining area and an entertainment centre including a 26-inch Sony HD television screen.

An adventurous sailing career includes 16 Atlantic crossings, a two-year circumnavigation and visits to the USA, South and Central America, and the Pacific and Indian oceans. Under power, twin 310hp Caterpillar diesel engines give Cyrano De Bergerac a range of 3,000 nautical miles at 11 knots.