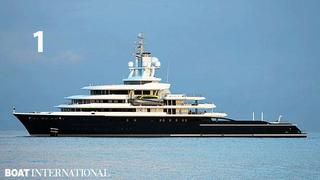 Last year’s tally of 355 sales, the highest since the global financial meltdown of 2008, was comfortably exceeded. Indeed, 300 boats had been sold by September this year, a mark not reached by December in 2013. For more statistics, see our superyacht sales market intelligence.

Some notably large yachts changed hands, but also significant was the amount of older yachts sold, clearing the inventory for more recent additions to the market. Sales in this category included the sale of 44 year old 69 metre Sarsen, Feadship's 1989 41 metre Odyssey and the 1973 expedition yacht from Davie Shipbuilding, 39.6 metre Phoenix.

Brokers reported that while activity was up, selling prices were lagging behind somewhat and overall the market was still in recovery. We should remind you that prices mentioned below are the final asking prices at the time of sale, rather than the actual selling prices.

Roman Abramovich took delivery of this luxury expedition yacht in 2010. Luna *was an upgraded replacement for his former exploration yacht *Le Grand Bleu. Built to cruise in ice and diesel-electric powered, she has two helipads, one forward and one aft, and the ability to stow a helicopter below decks for transit. Whilst she tops the 10 largest superyachts sold in 2014, she only reaches number two in the world's top 20 expedition yachts.

Modern classic sailing superyacht Nero, delivered in 2008, was sold in May. Nero was jointly listed for sale with Merle Wood, asking €39,950,000. She was the winner of the Best Motor Yacht over 75 metres at the 2009 ShowBoats International Design Awards. Measuring just over 90m, Nero is the second largest superyacht sold in 2014.

The third largest superyacht sold in 2014 was the six-deck 3,500GT superyacht Illusion. *Illusion was sold in August and became one of the most expensive superyachts sold in 2014. The biggest ever built in the China, she's currently still in build with delivery expected for 2016. Her styling has more of a British theme, based on the Rolls-Royce car and propelled by twin 3,000hp Rolls Royce diesel-electric engines with a predicted top speed of 14 to 17 knots.

It was a promising start to the year with the sale of 88m superyacht Quattroelle in February with Moran Yacht & Ship taking a leading role in the deal. Delivered last year by Lürssen, the fourth largest superyacht sold in 2014 boasts a gym designed by Olympic champion Usain Bolt.

Ecstasea *was built for Roman Abramovich, just like *Luna, the largest superyacht sold in 2014. In 2004 she was the largest Feadship ever built, yet boasted an impressive top speed of 35 knots, powered by no less than four MTU 16V4000 diesels (two engines driving each shaft and its variable pitch propeller) and one centrally positioned gas turbine driving a fixed KaMeWa water jet, at the time the largest ever made. Ecstasea was sold by Abramovich in 2009 and changed hands again this year.

The largest yacht built in the USA since the 1930s and the biggest ever built in the USA by volume, the 85.6m motor yacht Cakewalk, jointly listed for sale with Merle Wood & Associates and Burgess, had an original asking price was $179.5 million. She eventually sold in December this year, stealing a last-minute place in the 10 largest superyachts sold in 2014.

The eleven-year-old Pegasus V, built by Royal Denship and launched with the name of Princess Mariana, was sold in June. With a 79m hull and an $84.9 million asking price, Pegasus V features in the 10 largest superyachts sold in 2014 and the 10 most expensive. No doubt among the selling points were the boat’s party deck, boasting a piano bar with a marble floor and smoke generator, as well as the massive beach club with bar, television and a tender bay, which converts to a swimming pool.

Camper & Nicholsons project managed the build of Ocean Victory, delivered in 2009, and took care of the sale in October for her original owner, at an asking price of $120 million. At the time of build she was the largest yacht Feadship had built and since then has been used privately by the owner, never chartered. Measuring 75.75m, Ocean Victory was the eighth largest superyacht sold in 2014.

Delivered in 1970, Sarsen was built as a North Atlantic survey vessel, purpose-built for Polar exploration. Her sale in May was testament to the quality of her original build and also to her high level conversion to a charter vessel in 2006. *Sarsen *was asking $7 million – she may not be one of the most expensive yachts sold but she is certainly one of the 10 largest superyachts sold.

This 67.3m Feadship was built by the Van Lent yard in 1983 with styling by Jon Bannenberg. White Cloud was extended from 60m in 2005 and underwent the 25-year marine survey to maintain her to Lloyd’s Class in 2010. White Cloud was asking $18.9 million in February last year after a $5 million price drop. The asking price in May this year, when she sold, was $10.9 million. Measuring 67.3m, White Cloud steals the final spot in our list of the 10 most expensive superyachts sold in 2014.

See the 10 most expensive superyachts sold in 2014

Subscribe to BOAT Pro to access brokerage sales data and unlimited specs for 12,208 yachts in our Superyacht Directory – the world’s most comprehensive superyacht data.