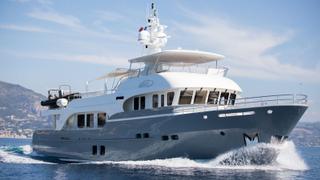 The 30.75 metre explorer yacht Mrs D, listed for sale by Y.CO, has been sold with the buyer introduced by Cornelius Gerling at Edmiston & Company.

Built in steel and aluminium by Dutch yard Moonen to a design by Vripack, Mrs D was delivered in 2013 with a major refit in 2015/2016 and a new paint job in 2018. A slick interior has silk sprayed teak and walnut panelling accommodating up to seven guests in three cabins consisting of a full beam master suite, VIP suite and a twin cabin with a Pullman berth, all with en suite bathroom facilities. In addition, there are quarters for up to four crew.

Lloyds classed, Mrs D has a large main saloon fitted with comfortable furniture and an entertainment centre including a 55 inch television screen. Forward is a formal dining area while up a few steps is the pilot house with a helm station along with a settee and table for informal meals while under way.

More informal dining, this time al fresco, is offered on the sheltered aft deck, with built in upholstered seating, a table and chairs. Stairs lead down to the lazarette housing a gym, sauna and shower aft of the engine room. Up on the sun deck is an array of sun pads and loungers, a Jacuzzi spa tub and a hard top providing partial shade.

The 2015/2016 refit was extensive and saw upgrades to the mechanical and electronic equipment along with the completion of her 2016 Lloyd’s survey.

Twin 600hp Caterpillar engines give her a range of 5,500 nautical miles at 9 knots and she is fitted with zero speed stabilisers.