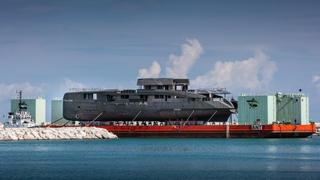 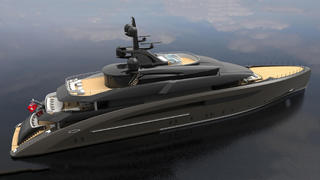 Italian shipyard CRN has released the first in-build photo of its latest project, the 62 metre Project NL 303. Fully customised to the owner's specification, this will be hull number 137 in the Italian yard’s fleet.

As the image below reveals, the hull of Project NL 303 has been completed at CRN's Ancona facility.

In a statement, the yard added: "Classical lines have been replaced by the unmistakable all-Italian style of Nuvolari Lenard, revealing rakish and yet harmonious lines that seem to be shaped by the wind. The bow is vertical, not to follow the current trend, but to ensure maximum length in the water, thereby increasing speed and maximising the forward volumes, where the tender garage is located."

Further details are few and far between at this stage, but it has been confirmed that Project NL303 will feature a maximum beam of 11.5 metres.

Other projects currently under development at CRN include the 79 metre hull 135, and the 50 metre hull 136, which is being built under the project name Superconero.

However, none of these will be long enough to displace the current flagship of the CRN fleet, the 80 metre Chopi Chopi, which was launched back in 2013.