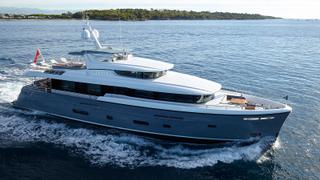 The 29.8 metre motor yacht Bijoux II, listed for sale by Simon Goldsworthy at Edmiston & Company, has been sold in an in-house deal.

Designed by Rene van der Velden, Bijoux II was built in steel and aluminium by Dutch yard Moonen to Lloyd's class with delivery in 2016 as the first hull in the yard’s Caribbean series. MCA compliant, her interior by Adam Lay Studio accommodates up to ten guests in four cabins consisting of a full-beam master suite, a VIP suite on the main deck and two twins with Pullman berths. All cabins have entertainment centres, Samsung flatscreen televisions and en-suite bathroom facilities, while a further three cabins sleep five crew.

The spacious saloon, with large panoramic picture windows on both sides, has seating to port facing a bar and an entertainment centre with a large screen television, while forward is a formal dining area seating up to ten guests.

A very large aft deck, with seating for eight in comfort or up to a maximum of ten, has stairs up to the sundeck located on the port side. The sundeck offers guests a large covered seating area to starboard, plus a wet bar, ice machine and service area to port. Behind the main seating area is a dining area with a table which can also be lowered electrically to form part of a large square sun bed if required.

Twin 600hp Caterpillar diesel engines give her a cruising speed of 11 knots and a range of 3,300 nautical miles at nine knots.